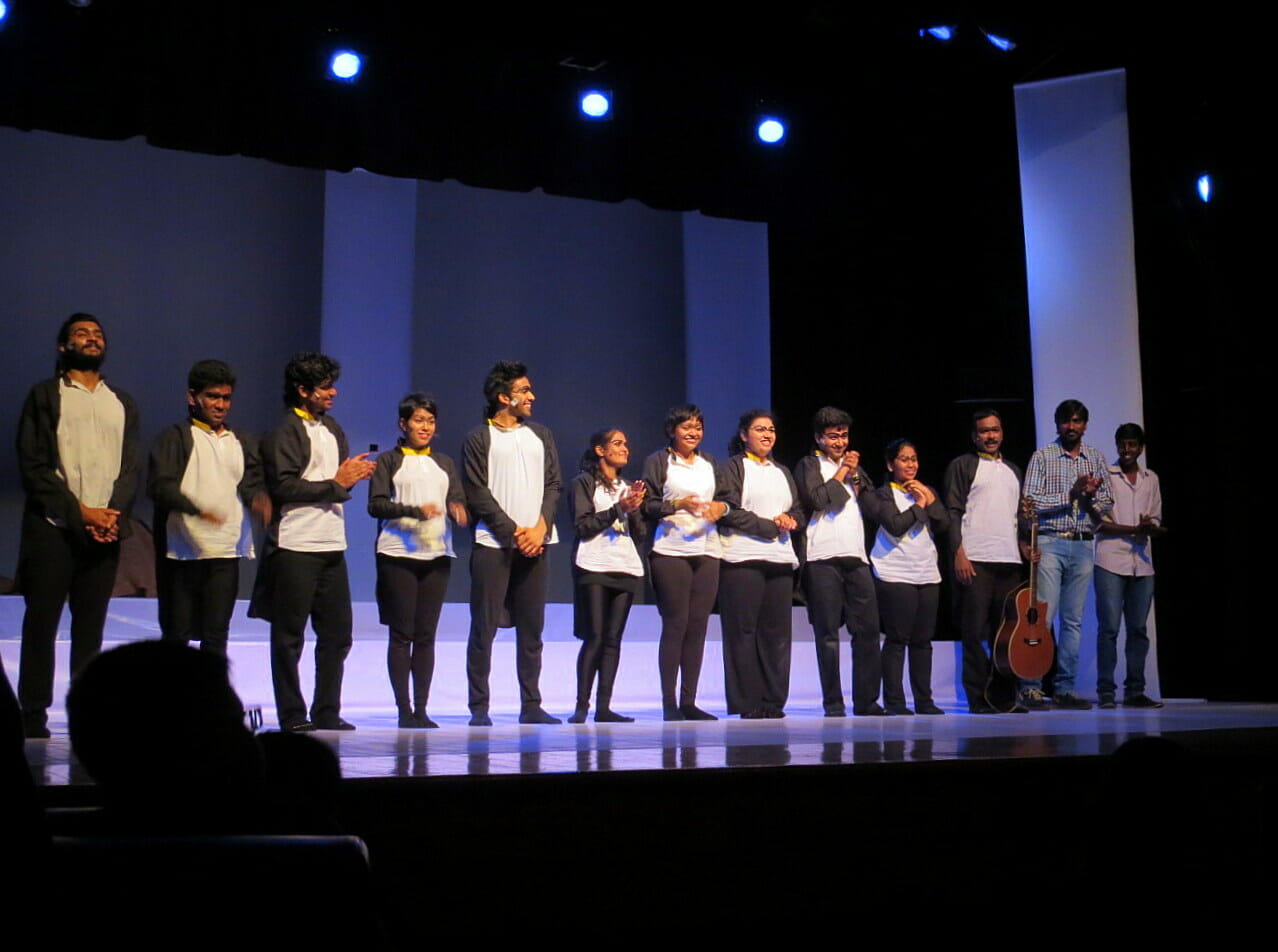 The cast and some of the crew taking a bow after the show.

It’s always a challenge to go to a play after it’s done several shows. This happened to me on 28th November, 2014, when I attended the staging of “Our Iceberg Is Melting”, by Bangalore Little Theatre (BLT), at MLM Convention Hall, J P Nagar.

The play, the fourth of a series, was staged by BLR in partnership with the Association for the Mentally Challenged (AMC), is the dramatization-adaption of the book, “Our Iceberg Is Melting”, by Professor John Kotter.

The play came about after Priya Venkatesh, long associated with BLT, visited Antarctica (read my article about her visit, here.

She was asked by Sir Robert Swan to spread the message of 2041 AD, when Antarctica will be thrown open to commercial interests. Conservationists fear the depredation of this last wilderness, and the consequent effects of both this and global warming.  Vijay Padaki  of BLT  says, several concepts: drama, conservation, entertainment, and education, came together in the creation of this presentation.

The play, in essence, is about a group of penguins who realize that ecological issues will result in their iceberg melting in the not too distant future, and the steps they take in order to prevent this.

Here is the promo video of the play:

In the book, the penguins adopt eight management principles elucidated by Professor Kotter; in the play, the pitch was more towards the layman.

The director, Amjad Prawej, showed his deft touches in the handling of both cast and crew. To direct a musical is no small feat, and the music in this production was melodious and raised the level of the play considerably, with its harmonics and creative lyrics (most of which were composed during the improvisation of the play). Chris Avinash,  the music director, who might have been the person with the acoustic guitar on stage (those on stage had their names displayed on the screen, but were not introduced individually), should take a bow for this. The cast members sang so well; it was very enjoyable indeed. The choreography, with a set design that used several steps and a collection of PET bottles (that did duty as both iceberg and as fish for the penguins) was creative.

The costume design, simple yet recognizably “penguin”, made for unrestricted movement; I thought back to the animated./actor penguins in Mary Poppins, and how they waddled about.

However, considering that this was the seventh show, the guitarist who was also the narrator, did flub his lines a couple of times, but all was forgiven in the enjoyment of the play as a whole. The lyrics of the songs were not very clear sometimes, but for the most part, the theatre space also had good acoustics, and the sound management was good.

The play ran for about an hour and a half, which passed very quickly indeed, with everyone in the audience enjoying the laser special effects very much. These effects actually took the story forward (and changed the scene, for example, from the iceberg to under the ocean) and were not just fancy additions.

There was some interaction of the cast with the children, too, but not too much, and the play;s narrative proceeded quite smoothly.

The production is aimed not only at children but “children of all ages”, and the wide variation in the ages of the audience I saw, bore this out.

The lighting was very evocative during the whole show, and highlighted and augmented some of the narrative.

Communication and publicity has been an important part of any production, and this was handled very well indeed. I have only one nit to pick…the excellent brochure addressed the issues of mentally challenged children, 2041 AD in Antarctica, and several other serious issues; but apart from listing the cast and crew, there was nothing about the play itself, that a child could read, for example, the names of the penguins and the basic story!

However, these are small blips in a very enjoyable play, and I’d strongly recommend watching the next two shows, at 11am and 7pm tomorrow (Sunday, 30 Nov 2014) at MLM Convention Center, J P Nagar, Bangalore.

“Our Iceberg Is Melting”, by Bangalore Little Theatre, in association with the Association for the Mentally Challenged. 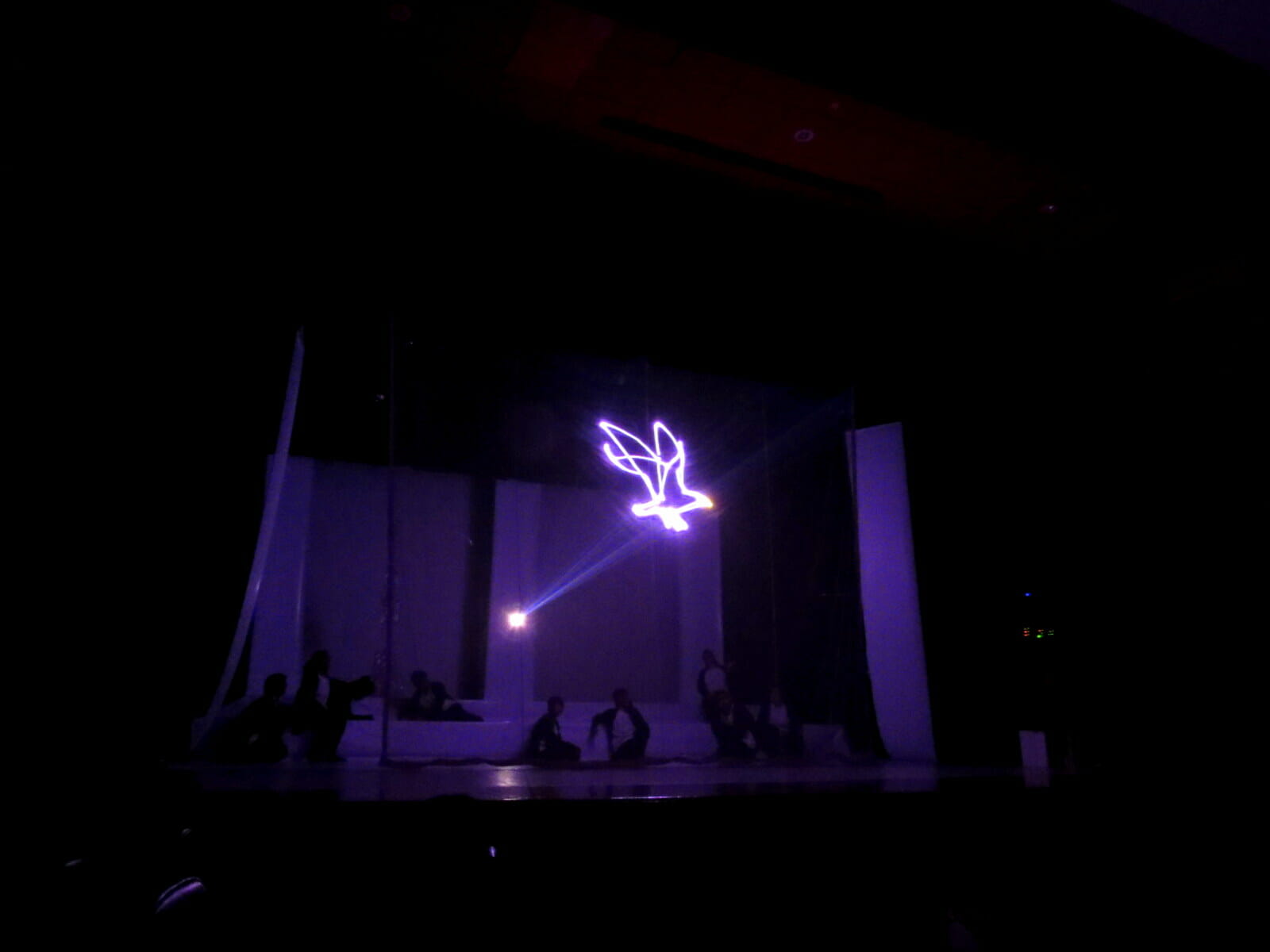 The laser effects, “Our Iceberg Is Melting”