It’s always a tug-of-war on the second Sunday of every month. I have learnt a lot on the Lalbagh walks, but since I am generally committed to the 3rd and 4th Sunday walks, I do like to go to other birding spots with my friends. Well, on the 13th of January, the tug was decided by the fact that the Asian Waterfowl Census, or AWC ) is on, and we could contribute data and pretend to be very scientific, while following the experts around and getting to see a lot of birds! So off we went to Hoskote kere, after MCS (Mandatory Chai Stop) on the way. 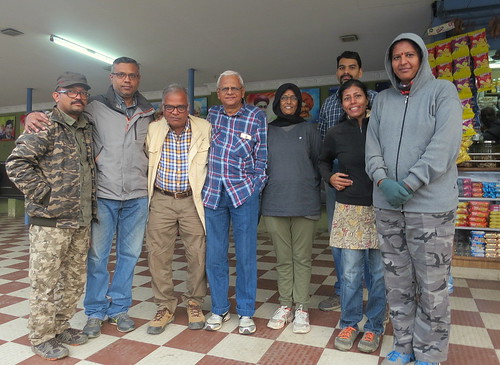 The group was not as large as I’d expected, but this lack of numbers was more than made up for, by the number of species sighted! I am not one for numbers, but definitely, between waterfowl, winter migrants, and woodland birds, we were able to sight, and observe the behaviour of, several species of birds.

We carefully turned into the toll-avoiding opening and proceeded down the bund of the lake. We opened our account with a White-throated Kingfisher and a Common Hawk-cuckoo sitting on the wire, out in the open. 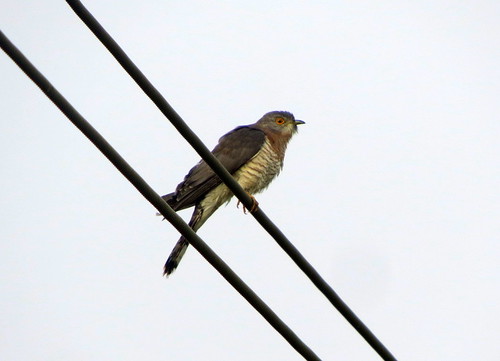 The fog had lifted by the time we got to the temple, and the first pale rays of sunshine showed several Spot-billed Pelicans, 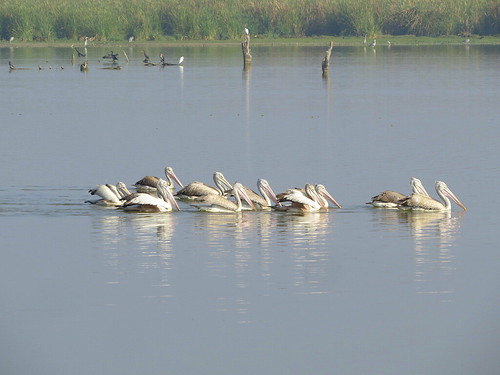 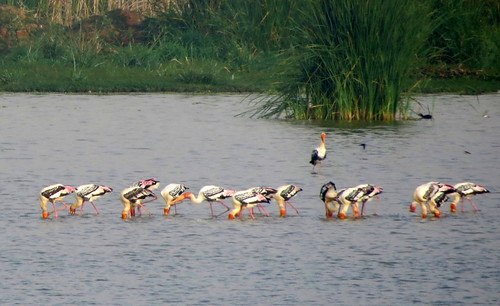 Cormorants and Grebes on the waters.

There were two scopes on hand, and this certainly helped many of my friends, who are still new to birding, to do some Spotting of their own, apart from the bills of the pelicans and the ducks! A Pied Kingfisher hovered over the water and dove in now and then, looking for a quick breakfast.

The “spotting” extended to the far side, the scope enabled us to look at a Greater Spotted Eagle, as well as three Marsh Harriers. perched on the bare trees, and occasionally sweeping over the water, alarming all the other birds. It was delightful to see a Common Kingfisher and a Wagtail apparently enjoying a boat ride. We don’t often see birds boating! 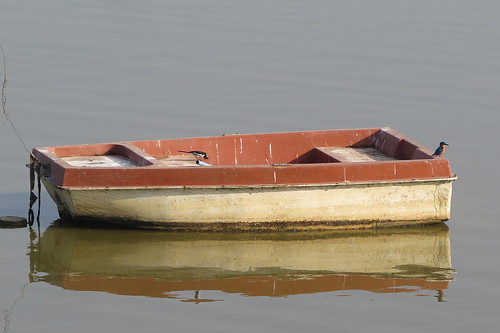 On the far side, thanks to the scope, the indistinct blobs resolved themselves into Garganeys, Shovellers, and Pintails too. 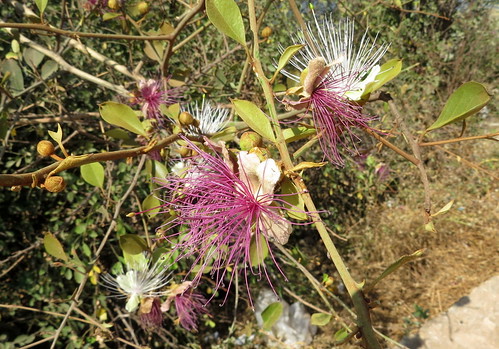 We walked down to the path into the lake from the Gangamma temple, 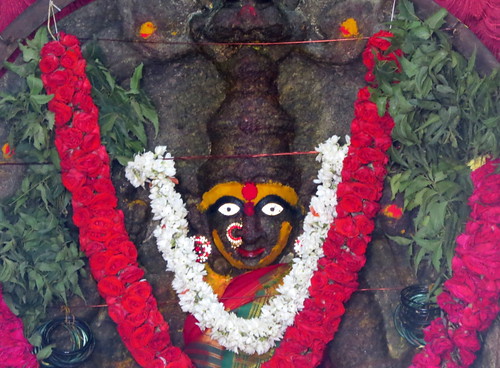 Gangamma, the deity at the lake. 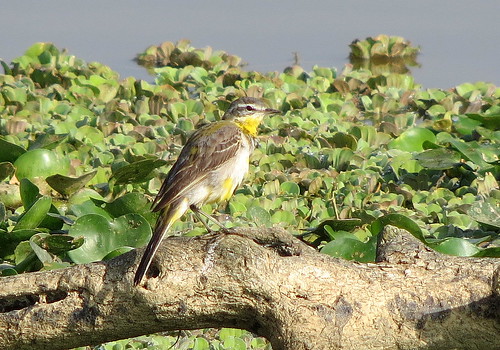 living up to their name with their bobbing tails, two Wood Sandpipers having a face-off (territory? food? We didn’t know), 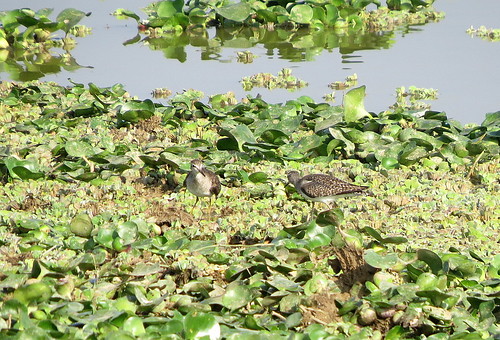 some Common Sandpipers flying with their white rumps showing. A Glossy Ibis gleamed in coppery sheen in the now strong morning sunlight, 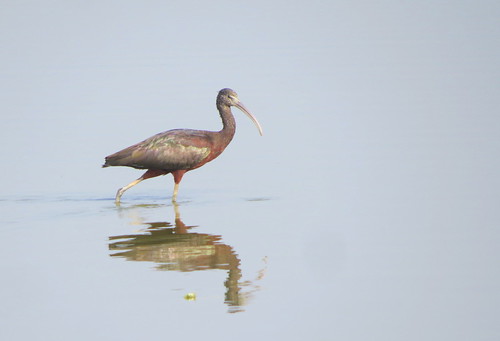 and we were able to make out the difference between Streak-throated, Barn, and Red-rumped Swallows in a birding id practical lesson. 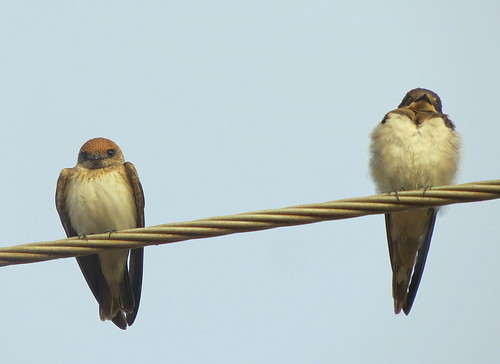 A Sand Martin (Common, Krishna Murthy told us) also put in an appearance. Another good comaprison study was of the three Egrets…
Little, Intermediate, and Great…It was like watching the Grimmskipp page come alive! It was lovely to see the Swallows making musical scores on the wire. I believe someone did, once, set the swallows-on-the-wire to music!

We brought out our snacks and biscuits, and stoked up enough calories to let us carry on well past the usual breakfast hour.

We then walked back up the road, doing the other part of the lake adjoining the path, and were rewarded by the sight of both the Grey-bellied Cuckoo 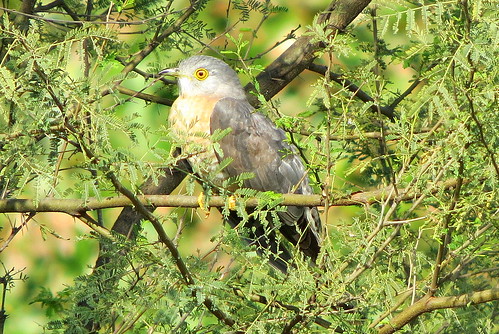 and the hepatic morph, which is generally female. 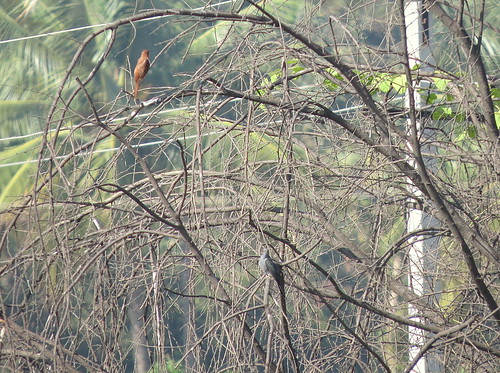 I looked at a non-singing Jerdon’s Bushlark, and a Common Hoopoe (no longer common, either) A (probable) Booted Eagle gave us a fly-past finale. 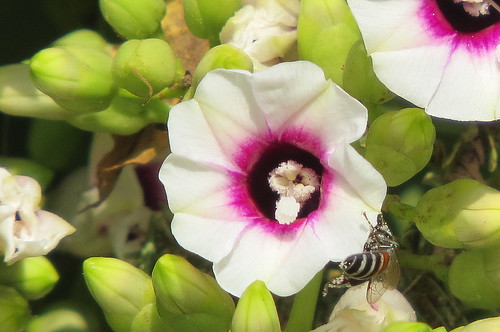 Not having realized just how much time had gone by, we decided to go to Sendhoor Cafe in Ulsoor, and our greed was rewarded by the fact that it was noon when we reached there, and everything was sold out! We should just have eaten at one of the two darshinis at the lake! Well, we managed to eat at the Second Choice Darshini (Kadamba, opposite Frank Anthony School) and went home, very happy with our productive morning. 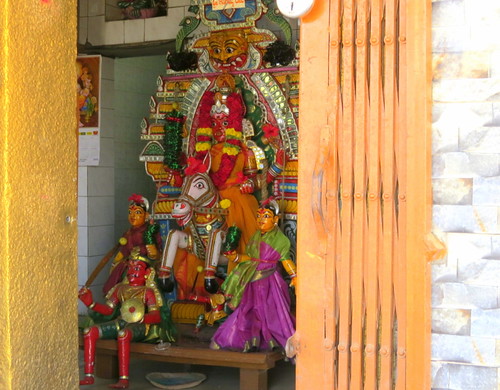 The eBird list, a very impressive one, put up kindly by Praveen, is

I’ve put up photos on an FB album,

You can see I really concentrated on the bird count this time as there are just a couple of wildflowers and one spider in the album..and no butterflies at all! 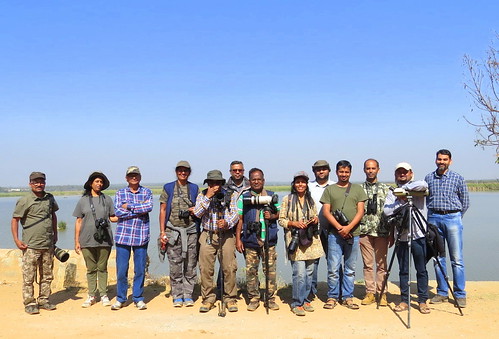 Most of the participants, at the end of the census.