I find it interesting to watch a translation of a play; watching “Maryade Prashne”, a translation, by Surendranath, of “Respect”, a play in German by Lutz Huebner was an experience on several levels. 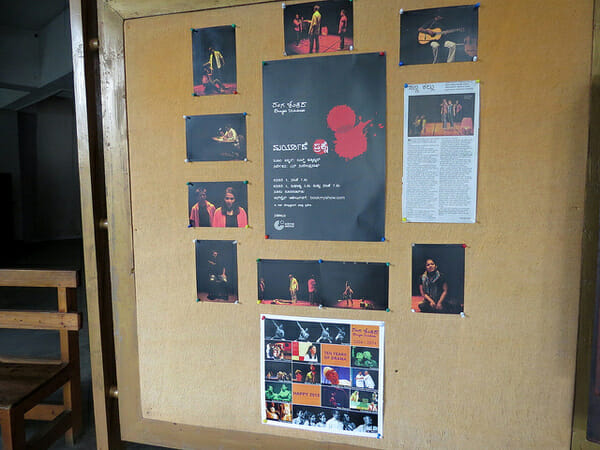 In the foyer. Pic: Deepa Mohan

I was curious to know how a play set in Germany would fit into the present-day milieu, and I was pleasantly surprised to see it melding in so perfectly. It sent out the first message of the play to me…that human equations, and power plays are common to humanity and not restricted to one culture or one nation.

The play started off on an intense note, which was kept up during its running time of 90 minutes, leavened by touches of humour here and there. Maryade Prashne (“A question of respect”) deals with the issues of self-validation faced by young people when they move from a rural to an urban setting. However, other issues of human personality power games, and gender issues, are also elicited.

The excellent brochure, brought out by Ranga Shankara, mentions that the play is about four young people, for whom one “jolly trip” from Bangalore to Mysore and back turns into tragedy, and the complex interplay of rage, relationships, dominance, the power of money, and egos …this forms the denouement.

One girl, Raji, is murdered, and her friend Urmi critically injured as well. Tilak Naidu and Ali, the two young men who took them on that ride, are facing charges of murder. A psychologist appointed by the court , Madhavrao, talks to Tilak to delve into the why of the stabbing, and Urmi talks about the events leading up to the incident.

The tension was built up ably to the high point of the stabbing, and rather than pass any value judgement, the play concludes by placing the scenario in front of the audience, and asking them to cogitate about it. 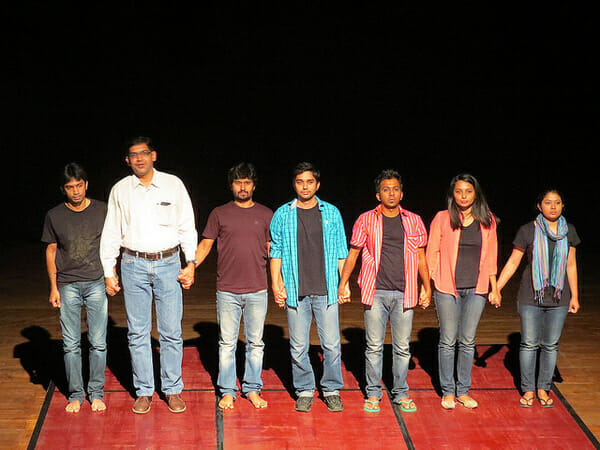 The music was entirely provided by one guitarist, and it also acted as a filler before the play started and during the moments when props had to be brought on or taken off the stage. The liquid notes of the guitar certainly enhanced the tense mood.

The lighting was entirely on only parts of the stage, and left parts of the stage dark, as if to enhance the dark theme. It was very effective. The sets were also minimal, with the lighting turning the scene into the drive or the sessions with the psychologist. The props were also not very elaborate, with just an air-gun, and stuffed toys denoting the time at a fair, and a bag of clothes consisting of the girls’ shopping at Mysore.

The costumes were all contemporary clothing, but I was still impressed by the choice of colours for the young men’s shirts, and the carefully-selected outfits for the young women, with Raji’s spangled pumps defining her attitude to life and to men.

I was very impressed with the performance of the cast. The language was what my fellow theatre-goer, Gayatri, called “Gandhi Nagar Kannada”; a vigorous vernacular, interspersed with English (and sometimes Hindi) words and swear words.The dialogue flowed naturally, and there were no lapses or fumbles that I, at least, could make out.

After the play was over, four of us friends discussed it over coffee. Usha and Gayatri both felt that the message was too crude and in-your-face; Usha said that she would have preferred a more nuanced version, and Gayatri felt that nothing was left for the audience to think about and discuss. Kripa, too, felt that the characters “did not develop” and they all seemed less impressed than I was.

At this point, Shrunga, who played Tilak in the show that we watched (3 Dec, 3.30 pm show) walked up with his friend Samragni, and asked us for our feedback, which we gave him in liberal doses! We asked him about himself, too, and we learnt that he is straddling both theatre and movies right now. He told us about the shows last year (June 2014), and confirmed that Lutz Huebner had come over, then, and guided the Kannada production. (Huebner’s work has been translated into many languages, but this is the first translation into Kannada.) It was a great discussion with lively debate. 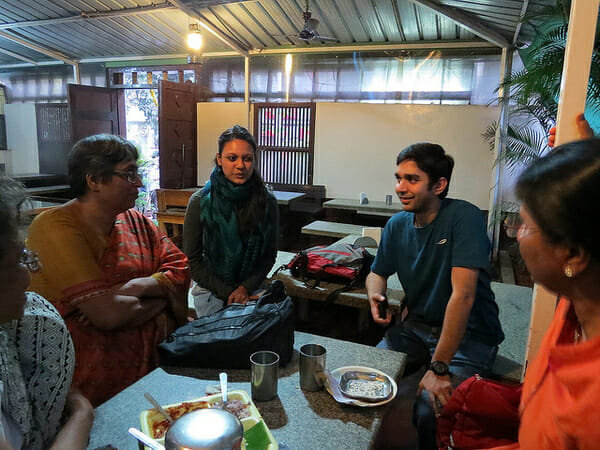 Shrunga chatting with members of his audience. Pic: Deepa Mohan

I made the suggestion to Shrunga which I often make in my reviews: the cast and the crew should be individually introduced after the play, and if time permits, there should be a little discussion with the audience. Alternatively, the group can attach a tear-off stub to the brochure on which interested members of the audience can fill their contact details; this creates a good audience base for the theatre group, and often results in valuable interaction and feedback. (There was a line giving their email id, which I am giving at the end of the review.)

Also, Shrunga had stepped into the place of Kiran Hebbale, and his name was not on the brochure; I feel that in such a case, an announcement should be made. If I had not met Shrunga, I would have only mentioned the name of Krishna, and it would have been a factual error.

All in all, I would strongly recommend “Maryade Prashne” to the theatregoers of Bangalore….and other plays of Huebner, translated by the talented (his direction was very subtle and effective) Surendranath.