Playing with tops ia a boys’ sport and pastime  in India.

This is not a sexist statement, it quite simply is so; I have not seen girls playing with tops, from my childhood, till date.

As I grew up, I found that there was a season for tops (referred to as “lattu” in Hindi and Bengali), much as there was a season for marbles, kite-flying, cricket, football, and gilli-danda. Tops came traditionally as wooden globes, with nails sticking out of them. Thin ropes were wound round and round the lower part of the top, which had grooves to accommodate the string. Then, with a sharp whip-like movement, the rope was thrown, and the top would land on the ground, spinning at top speed.

Boys could often throw the rope around the nail on the spinning top and get the top to fly up into the air, to be be caught triumphantly; or actually spin along the tautly-held rope itself, like an acrobat on a high wire. It was a magical sight to see the dexterity with which some top “players” could handle their tops. I took a video of one boy in Anekal, some time ago:

You can see how the top is spun, and then gathered on the string again

The upper part of the top would be painted in bright, solid colours which could change in appearance as the top spun. I’ve seen other tops being sold, recently, especially wooden tops, brightly coloured, made in Channapatna, Karnataka. But these, to my knowledge, are not “competition” tops.The string, in these tops, was much thinner, or some of them were just spun by hand.

The whole subject had been forgotten when, walking down Bannerghatta Road yesterday evening, I saw some Rajasthani boys playing with tops: 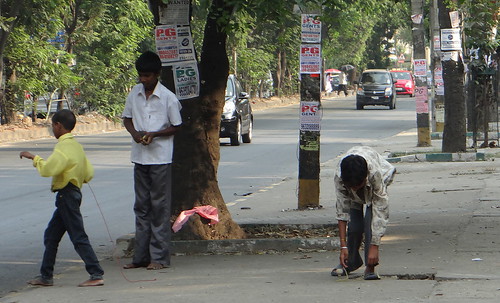 Each boy could throw the top up by putting the rope around it and whipping it up. And apart from this, one boy would, with deadly accuracy, release his top so as to land exactly on an other spinning top, and knock it out of its spin. This, obviously, constituted a victory of sorts in the game. 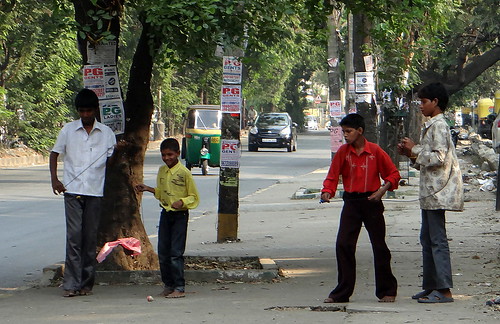 You can see a top lying on the ground in this photo, having been “knocked out” in this way. It was definitely quite an organized, competitive game and took me back to my childhood when my brother and his friends played each evening with them, winning and losing tops, until the “season” ended…in the same mysterious way that the boys knew when the season started, they knew when to put their tops away and go on to the next kind of game!

More affluent children may have their computer games and their X-boxes…but I was glad to see that such fun sports, which do not need batteries or electricity, still survive amongst children.

Many Rajasthani families migrate to our cities to work as construction workers, carpenters, and makers of ceramic and glass artefacts…it was the children of some of these families that I photographed yesterday.