On Sunday, the 10th December, 2016, the Lake Census effort across the lakes(kere) of Bangalore got under way with an orientation program for those who had registered to take part as volunteers in this month-long initiative.

The event was held at the Venkatappa Art Gallery on Kasturba Road, from 1.30pm to about 5.30pm. 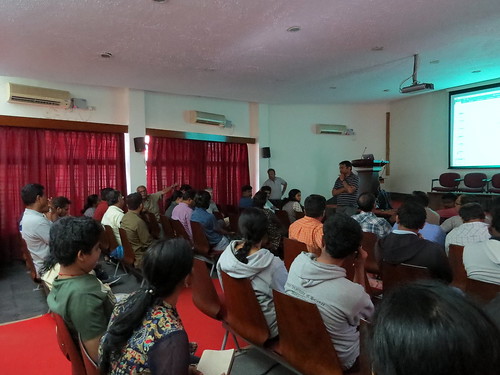 Dividing the lakes that could be observed and documented under 22 different areas, those who are organizing this year’s effort welcomed the gathering, introduced the sectors and the lakes falling in each of them. 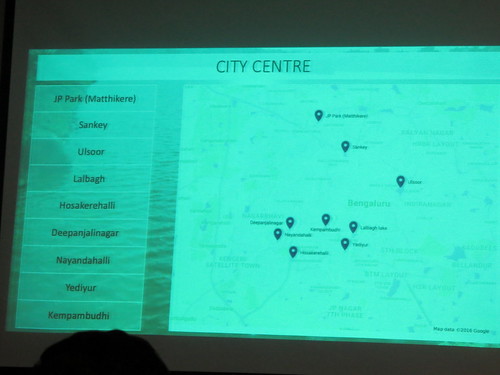 At this stage, a lot of the water bodies came under discussion as various people expressed concern about the moribund status of many of them.

After a break for tea, Dr S Subramanya, noted ornithologist of the city, presented a slideshow about some birds that can be easily confused with others, and how to identify them properly in the field.

Following this, Ulhas Anand took the volunteers through a process of how to go about the lake census, how to keep one’s safety as paramount, to avoid confrontation with local people,  and how to visually or physically cover the various aspects of the lakes volunteers would be visiting.  Pragmatic warnings (such as not to wade in the shallows of a lake because mud-lifting operations could pose a hazard) were given, as well as practical tips (start early in the morning and do not tarry with casual bird-watching).

The lake census is being combined with the waterfolw census, but this year, revealed Ulhas, not only the waterfowl but the woodland birds are being counted and documented as well, to ensure a wider database.

The form for the lake census was gone through thoroughly,, and volunteers were told how they should be filled. More details were taken from many volunteers for the task of organizing the various teams that will be covering the lakes and their condition, across the city, and the dates on which the census can be carried out.

One slide by Dr Subrahmanya that was especially useful was that of a cross-section of a lake by its water-depth, identifying the possible birds that can be seen at varying water levels. 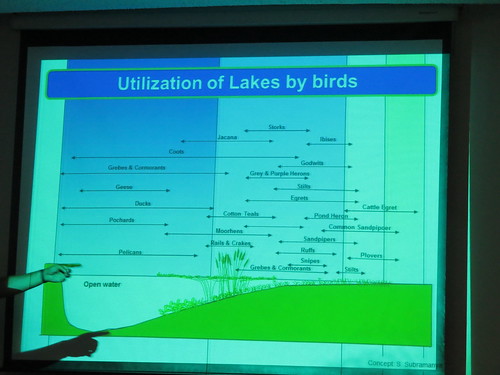 Since most of the lake census volunteeers belong to the birdwatching and wildlife communities of Bangalore, the meeting broke up in a spirit of camaraderie. Many remembered how, last year, the lake census was revived by two young college students, Anvitha Rao and Joiston Pereira, after a long break.