Having missed every opportunity to get one, I finally went to get my Aadhar card along with my daughter today.

For a while now, I’ve been trying to find the centres where the Aadhar card work (collection of application forms, verification of details, collection of biometrics) is still being done. After having found that a number of centers do not do it any longer, I heard from several people about Karvy (on no website did I get this information, alas!) in Basavanagudi. 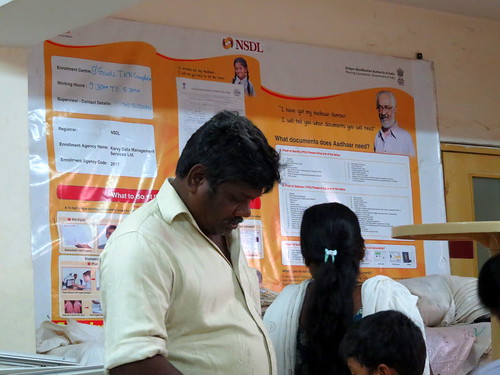 The full  address of t Karvy Consultants is:

You can see the link to their webpage here.

They are the central venue, in Bangalore, for the Aadhar card process.

The process of appying for the Aadhar card is simple. A form can be taken from the Karvy office, or downloaded from the website.

It’s quite simple to understand, and generally, three supporting documents are asked for: Proof of Identity, Proof of Address, and Proof of Age. For each, you can choose one of the several documents that will be acepted. In my case, I used my passport for all three, so my application consisted only of the form and one document.

Please take xerox copies of the supporing documents and also carry the originals with you.

We reached just past 10am and it was quite crowded, and it took a while to make sense of the procedure. 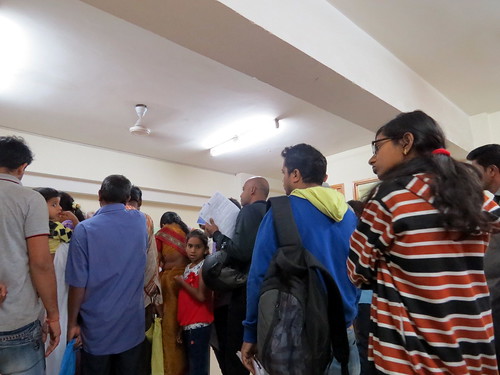 The queue moved quite fast, and since we’d filled up our forms carefully, earlier, we handed in the forms when our turn came. We then waited for about an hour before our names were called (one had to be careful to listen, as there is a lot of noise from the crowd.

We then went to another part of the office where the biometrics are taken It took about an hour of wait before our turn came up. For each of us, first our originals were examined and verified. Then, the four fingers on both hands were scanned. 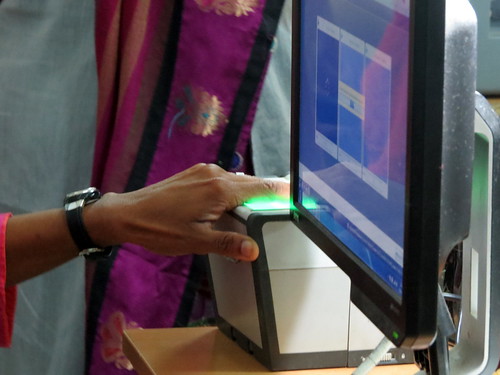 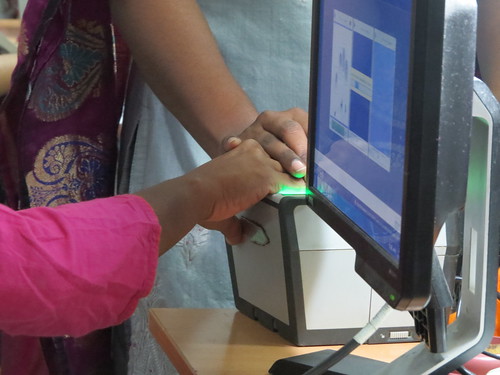 then our two thumbs. 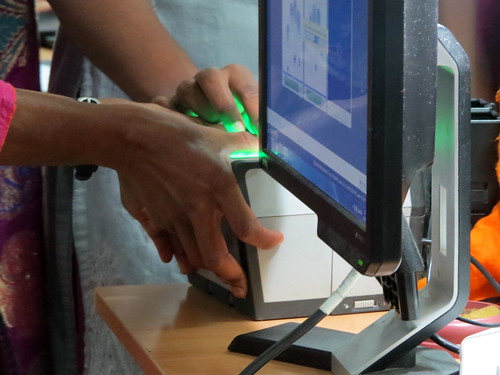 Then there was the retina scanning, 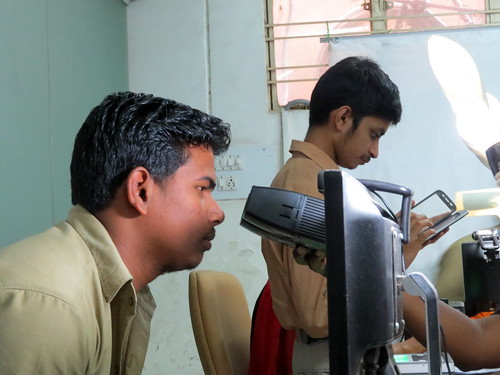 Our photos were also taken. (I am still reeling from realizing how I am going to look on my Aasdhar card!) 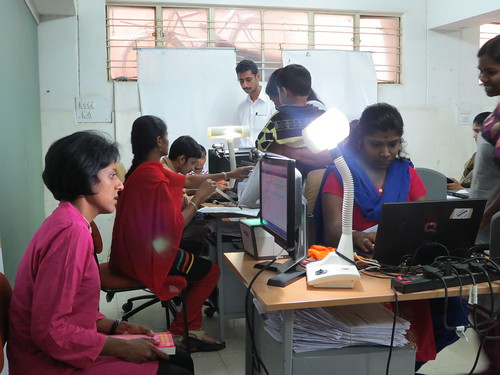 The staff were all efficient and worked with all the speed they  could muster. There were no coffee or other breaks at all, and I was told that they work 9am to 5pm on all seven days, with lunch being taken in relays, which is dedication, indeed.

The process for each person takes about twnty minutes. When there are children, squirming and running, the process can take a little longer! 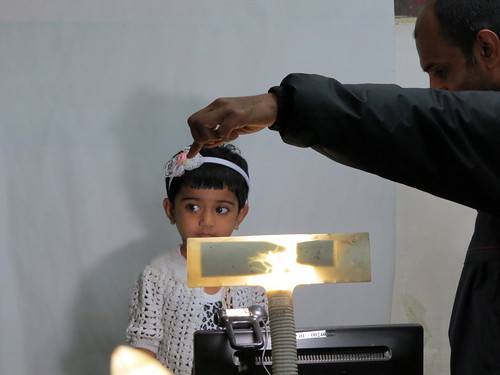 Ms. Mahalakshmi was the technician who did our metrics, and she was pleasant and smiling (as they all were.) 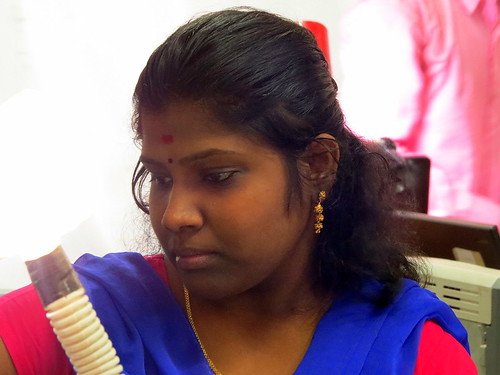 She asked me why I was taking photographs, and I explained that I wanted to describe the process for anyone who wanted to get a card now. They were very happy at the suggestion, and we were all laughing and joking by the  time we finished.  My daughter, while outside, also helped some other people fill up their forms.

We were asked to review our co-ordinates on the computer, and once we said that they were accurate, we were given two sheets, one for the use of the center and one for us, that we had to sign. We took our copy, put away our original documents  carefully, and came out at about 12.45pm. The process was crowded, but very pleasant and with no major hassles.

We are told that the Aadhar card will be sent to our addresses by post, within a month or so. I will update this post when it arrives (no, I won’t be showing you the photograph!)

So, as of 10 June 2016, I can attest that there is a free and relatively easy way to apply and get one’s Aadhar card. After 25 days of its receipt, one can take it back to Karvy and get a PVC laminated card, for Rs.25 (The Aadhar card process is absolutely free.)

I hope this helps other people who are thinking about how to go about the process.  I confess that I have dilly-dallied on this card as initially there were several inaccuracies, and worries about privacy. But now, if I need to claim the subsidy on the cooking gas connection that I am eligible for (my income is below the specified limit), the Aadhar card has become mandatory, so I decided to get it.

By they way, my daughter and her family are American citizens who are Overseas Citizens of India (earlier called Persons of Indian Origin.) They too can get Aadhar cards. The only proviso is that each person, or child, has to appear in person.

I am impressed at the transparency and efficiency of the Aadhar card enrolment process.