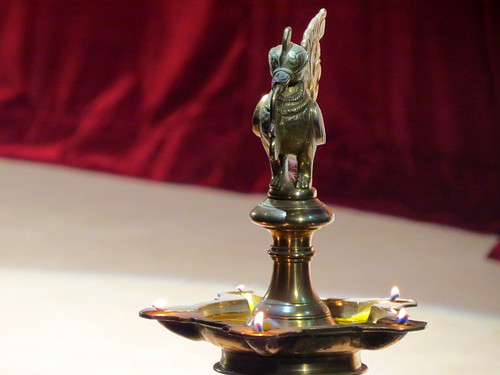 Once in a while, one is privileged to attend a concert that not many people seem to know about, Indian Institute of Managerment, Bangalore (IIMB) and The Society for the Promotion of Indian Classical Music And Culture Amongst Youth (SPIC MACAY)  together organized a violin concert by Lalgudi Shri Krishnan,  accompanied on the mridangam by Shri K U Jayachandra Rau , and on the ghatam by Shri H Sivaramakrishnan.

The main raagam for the evening was Mohanam, with Nannu palimpa” being chosen as the kriti. A Jayadeva ashtapadi in Hamir Kalyan, a composition in Sindhubhairavi were played, and the concert concluded with one of his guru’s (he always referred to Lallgudi Shri Jayaraman as his guru, never as his father!) thillanas, in Mishra Maand.

Krishnan’s mastery over his instrument was absolute. The clarity of bowing and notes that marks his guru’s style was very much in evidence, but Krishnan is striking out, and creating his own style as well.

The notes rang out pure and true,  as did his evident knowledge of the keertanais he played. Embellishing kalpana swaram passage with several mathematical “theerpu”s, at no time did he allow “kanakku” to predominate over melody.

Both the percussionists were excellent, plus, they played together beautifully too. This enhanced the entire performance, with first the mridangam and then the ghatam, taking up the accompanying role to the violin. The confluence of the two instruments during the course of the thani avarthanam was extremely enjoyable. The concert lasted a crisp, well-timed 90 minutes, beginning almost punctually at 6.30pm.

Post the concert, Shri Krishnan fielded a couple of questions from the audience. He talked of how the internet has changed the face of Carnatic music; how it’s possible to learn from any “guru” thanks to the net. This was a coin with two sides, he said. Since all of the music is out on the net (my concert, no doubt, has already been posted!” he smiled) artistes cannot afford to be stale or stagnant, and must constantly evolve with the music. This constant evolvement, in counterpoint with the constant quality of the tradition, he said, was one of the wonders of Carnatic music. He emphasized, each time, that things depended on the individual viewpoint of the artiste. He came across as a refreshingly open-minded musician.

The only negative that  I could possibly spot was the sad fact that the auditorium, with excellent acoustics, remained less than half full. I do wish both IIMB and SPIC-MACAY would publicize such concerts more, so that a hall full of avid listeners could partake of the musical feast provided to them.

My grateful thanks to Shri Selvarajan Rajeshwaran, who invited me to the event. Two friends and I, who’d had avery troubling afternoon with the illness of another friend, found peace and serenity in the music.