Of late where there are parked cars (for example, in front of restaurants) I’ve been noticing a lot of young men with various implements, and I realised that they offer to carry out repairs/ rectify dents on cars for a fee.

Today, I had gone to GKVK with a friend. As we were walking back to where the car was parked, a couple of young men who were passing on a scooter stopped in front of us, and approached my friend. “Your car has a dent at the back, sir!” said one. “We will repair it for you in just a few minutes and there won’t be any scratches, we promise!” added the other.

Not wholly convinced, my friend asked how much they wanted. “Rs.1400,” said one of the men. My friend laughed and said, “Well, I don’t have so much money on me, but thank you.” “How much will you give?” was the expected rejoinder. “I have Rs.500, and I can give you that,” said my friend.

Accepting this, the two men got to work. 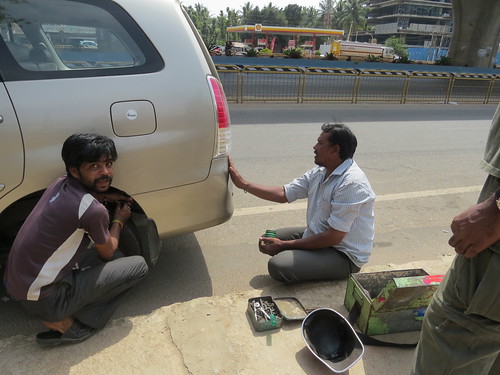 One set fire to a roll of newspaper, and put it close to the area of the dent, heating it up. I was worried that the paint might scorch… but no, it didn’t! 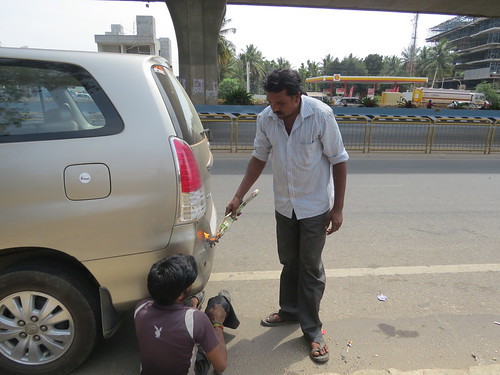 The other young man put in a rounded wooden mallet kind of implement, and began to bend the dented metal outward. 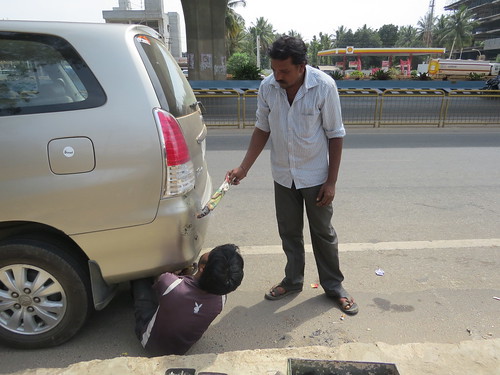 And lo and behold, in a few minutes, the dent was rectified! Yes, of course the scratches that had accompanied the dent remained, but not a new scratch was added. The man polished  the area a little bit. 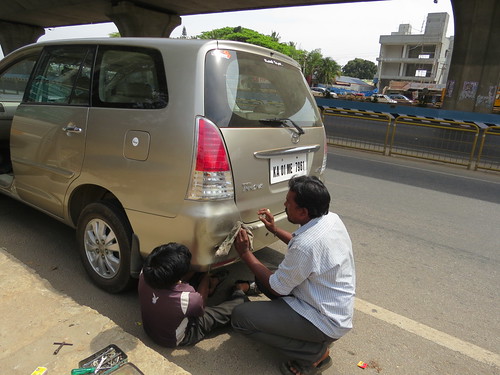 Intrigued by this entrepreneurial spirit, I asked their names and where they were from. “We belong to Hebbal,” said one. “Would you come to south Bangalore?” I asked. “Even if you call us to Dubai, we’re willing to come!” said the other with a big grin. It was a win-win situation; they said they were going to attend a call further on, and happy with having his car dented rectified so easily, my friend returned home, too.

This also makes me realise that even the local garages, whom car owners go to rather than pay huge amounts to the “authorised dealers”, are making quite a profit on this ‘dent’istry! And of course, no one can guage the huge margins that the authorised dealers have.