The first meeting of Eco-volunteers (those who took the Volunteer Training Program, or VTP), was held at ThoughtWorks, Koramangala, Bangalore, on 120414. It was as if Ganesha, the Elephant God, had waited in the foyer with a gesture of benison! 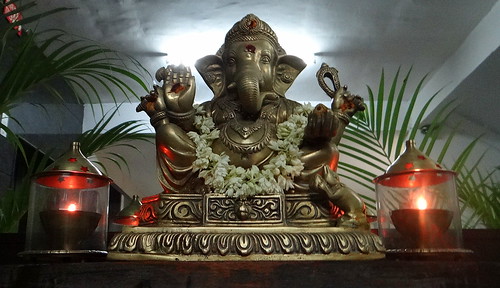 Raju KV took up the job of co-ordinating the meet, and conducting it: 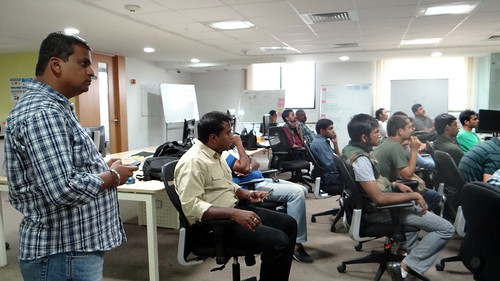 Over 40 people turned up, showing their interest in volunteering for wildlife conservation: 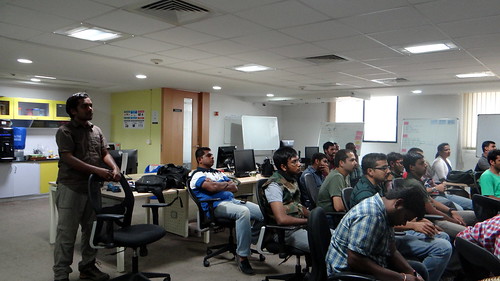 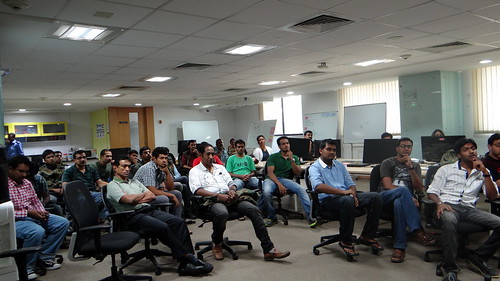 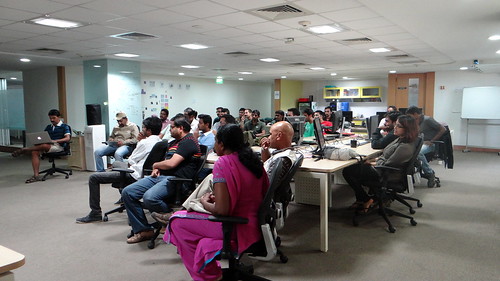 Raju welcomed the gathering, and while the two Prasahanths set up their video presentation. 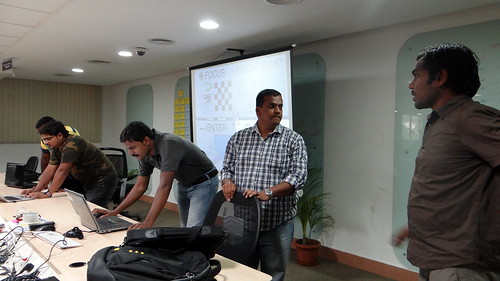 N C Mohan talked about patches of fragmented forest, which needed even more protection than areas designated as National Parks. He showed slides of patches of forest which were deliberately set on fire, patches where he found snares, and tried to take action against these on his own.

This was followed by Prashanth Nageshappa and Prashanth Nayaka talking about the film they made on Bhadra, titled, “Unsung”. They also showed a short about how it was made, and there was a discussion about how this documentary, made entirely by their private funds and effort, could be made into a meaningful tool, while facing possible legal implications about its being a corporate-owned film or a documentary under a creative commons licence.

Raju KV then presented a slide show, called “Guarding the Guardians”. This was about hygiene and health issues amongst the Forest Department personnel, and how the team of doctors tackled them. The plan is to spread this to the rest of the Forest Department, with sustained monitoring of health check-ups. Funds were appealed for, for this initiative. The doctor team talked of how some Forest Guards missed out because of lack of communication.

Nutan then made a presetation, “Saving the Last Wild Tigers of India”. This, rather than the usual feel-good images, gave the audience some striking and disturbing images of the kind of snares that poachers use, and tigers caught in them. A lively discussion ensued, about snares. Meanwhile, I photographed some coins minted to help in the cause: 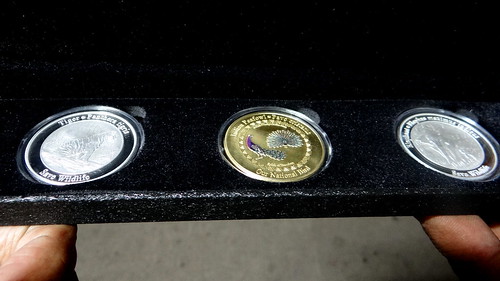 Sarath then spoke. He stressed the value of patience and slow and steady learning, in the field of wildlife volunteering. He enumerated the several communications he’d received from various Forest Department officials, regarding volunteering help that they need with various census activities. He stressed that things have to be done with the co-operation of Forest Department personnel…especially the RFO. 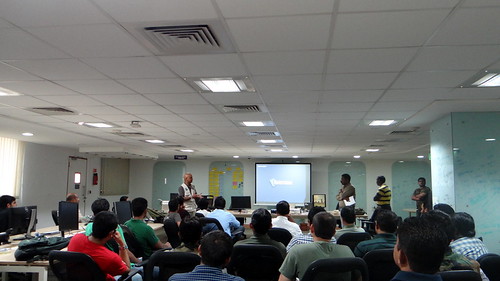 He touched on the fact that the VTP members were already 220 strong, and that they need to put their skill sets on record so that these could be utilized when needed.

He proposed that various core groups be formed to take care of various areas, such as health of Forest Department personnel, awareness-raising, camera trapping, pilgrim management in forest areas, education, and post-rehabilitation monitoring. Brinda Suresh would be co-ordinating these core groups.

He announced a Corporate Social Responsibility (CSR) meet on the 30th of April, 2014, at the Marriott, to get the corporates involved in funding wildlife conservation and volunteering activities.

He also announced the next VTP, which will be held at Kudremukh, from the 18th to the 24th of May. All members present were asked to spread the word.

The gathering also resolved to meet once in three months, and the next meet scheduled for June 14th, 2014.

Here’s a short video of the gathering:

Raju then closed the meeting with a vote of thanks, starting with Sumeet Moghe, who had kindly made the ThoughtWorks premises available for the meet, and for providing refreshments, too.

(Some of us need a 101 on operating the coffee machine!)

The meet was generally felt to have been a very productive one, and many of the members continued their exchange of views for a while after the meet.