Having read this article in the Hindu, dated September 28th 2008 and also enjoyed this article by my friend Adarsh Raju about the trees and the temple, written on July 15th 2015, I’d wanted to visit this heritage site for some time. On January 30th, when my friend Mallika Rajasekaran asked our mutual friend Arun Visweswaran about the location, I was very happy to finally be able to go Nallur, a village in Devanahalli taluk in Bangalore Rural district, which once hosted vast tamarind groves, now has a patriarch of a tree, estimated to be 900 years old, still bearing fruit. The grove is now a bio-heritage site and the Karnataka Forest Department has been taking care of it for the last few years. The tree was among thousands planted during the reign of King Rajendra Chola, at the beginning of the 12th century.The trees can be found on the road from Devanahalli to Sulibele, 40 km from Bangalore. 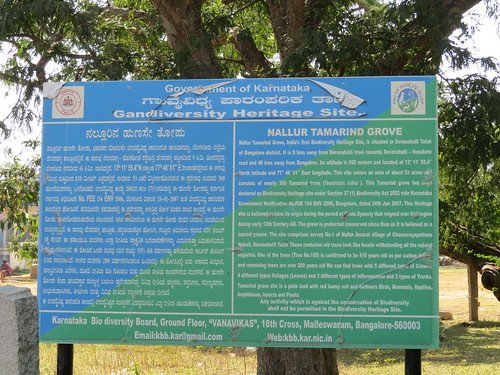 ‘Amaroy Thopu,’ (as it’s mentioned in epigraphical records) has still more trees aged between 500 and 800 years on an area of 53.02 acres. The youngest one is about 80 years old. Walking amongst these gnarled ancients, we had a big bonus…the person who was instrumental in getting this grove notified as a Biodiversity Heritage Site, was actually visiting the temple, with his team, when we were there! We had a long chat with him and he showed us how one of the ancient trees has developed adventitious roots within its hollow trunk, a feature not seen in tamarind trees.

Here’s Dr.V. Bhaskar, the Professor of Forestry at the National Afforestation and Eco-Development Board of the Ministry of Environment and Forests, along with his group. 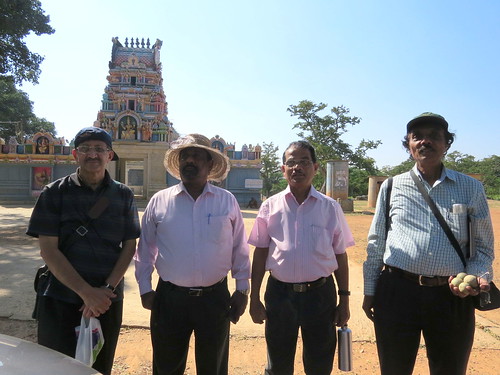 “The longevity and the productive years of old trees belonging to the same family of trees is a matter to be studied by biotechnologists,” he said. “This could be a gene bank in addition to being a heritage site.” He added: “Some trees here have shown extraordinary growth. They have developed prop roots and root suckers that are uncharacteristic of tamarind trees. I reported this phenomenon in My Forest journal in June 2004. Even though the mother trunk was dead, a series of root suckers have arisen from the trunk roots, which is a phenomenon unknown before this.” 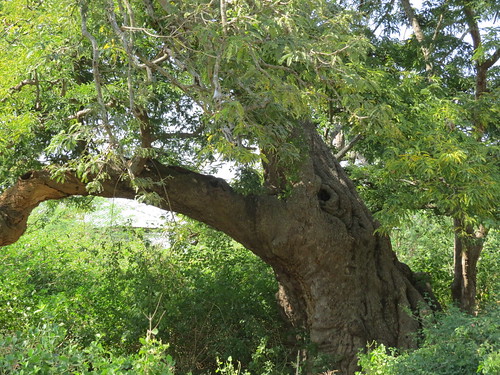 According to Dr. Bhaskar, prop roots are characteristic of banyan trees and are meant to support lateral extension. But in these tamarind trees prop roots have unusually arisen from within the hollow stems and struck the ground as if the trees were trying to support themselves.

Here’s Dr. Bhaskar, showing us pictures of this: 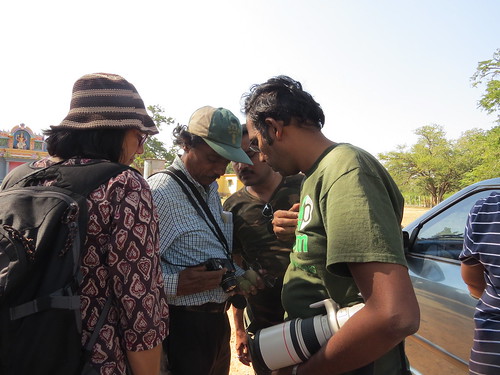 Narayanaswamy, a horticulture specialist, told us: “It is very unusual that the life cycle of this tree has crossed 900 years, when tamarind trees have a life cycle of not more than 400 to 500 years.” In one case even the trunk roots put out shoots that are bearing fruits. They are not independent trees but have sprung up from the mother tree. One tree with the large trunk was struck by lightning 75 to 80 years ago, with the trunk splitting into two. Over the years, villagers made a path between the two halves. Both halves have become independent trees, bearing fruit. Next to the grove is another jewel…a temple to Chennakesava, that, unfortunately, lies in ruins. 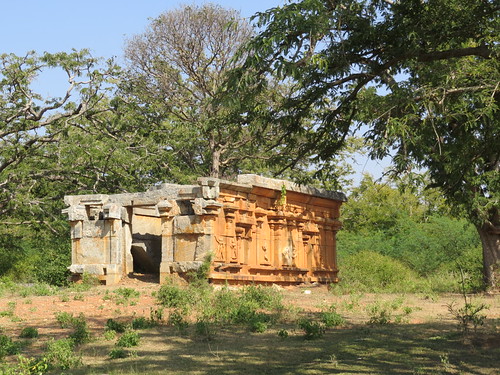 Dr SK Aruni, of the Indian Council for Historical Research, points out that the friezes on the temple walls are typical examples of the Vijayanagar style of sculpture. 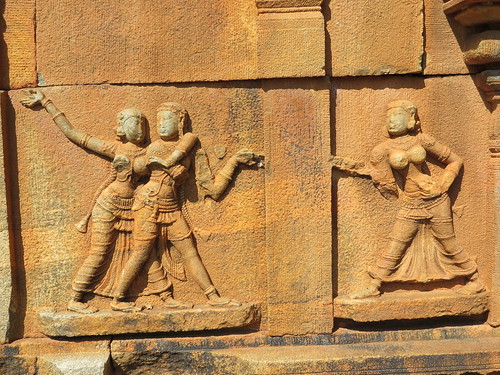 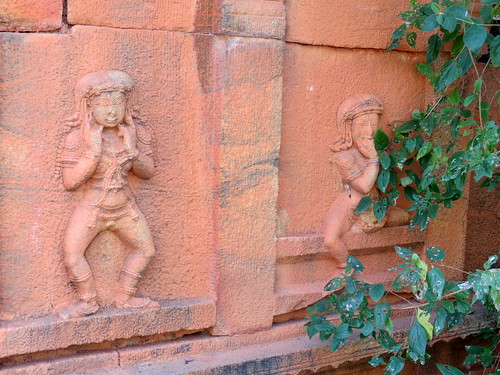 There is also a temple to Gangamma, which, it is felt, must have been recently constructed over an ancient temple. 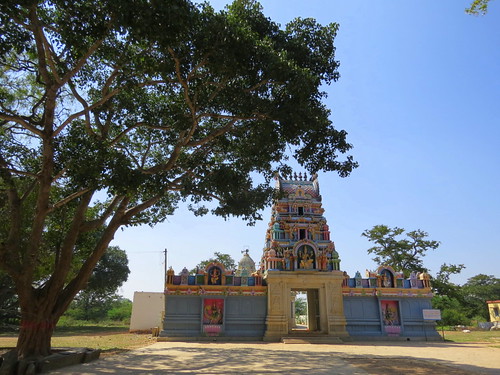 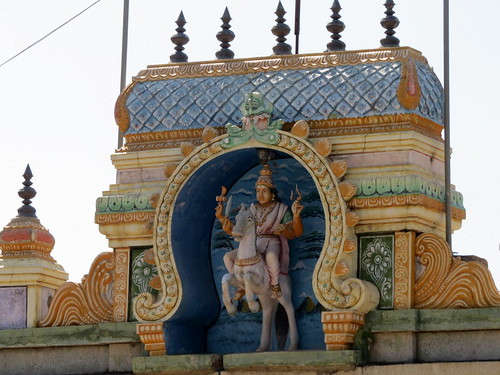 One sad fact is that the person who’s been appointed to watch over the site, Muni Raju, has not been paid his salary for the past seven months. 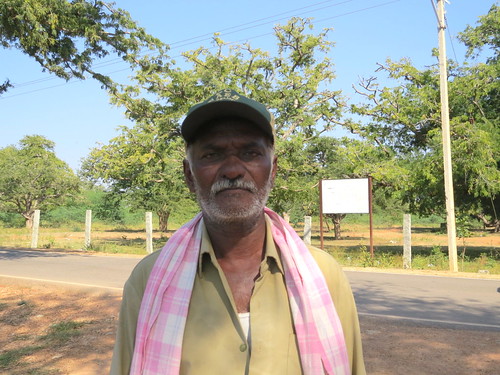 I met this shepherdess, Chennamma, who walks with her sheep amongst the peaceful ruins, trying to eke a precarious livelihood. 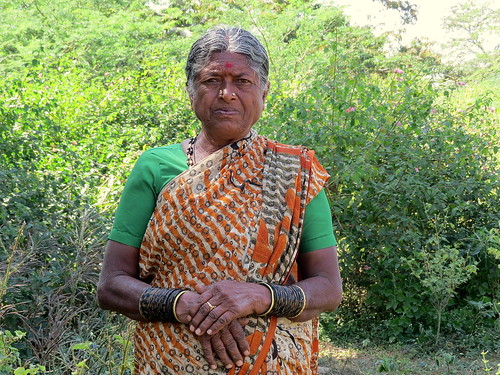 I loved her bangles! We left the beautiful place to the cattle, the gods, the people and the trees…we hope to visit there again soon…as Dr. Bhaskar told us, “People have to keep visiting the place to ensure that it is reasonably maintained by the Karnataka Forest Department.”