For some time now,

eBird
has emerged as an application that is easy and convenient for birdwatchers (commonly referred to as birders) to record their bird-lists and allied observations.

“We are working (through a partnership called Bird Count India) to promote birding and bird documentation in India,” says Dr Suhel Quader. “We suggest that birdwatchers use eBird as a convenient tool; and we also advise local/regional groups who wish to implement more systematic projects.”

The idea is to develop a country-wide database of bird sightings and observations, on an open platform, which can be used for analysis or research. Each birder’s use of the tool is up to the level they want; it can either be a method of keeping bird lists or could be taken further.

On Saturday, 19th of November, 2016. eBird organized the first meeting of “eBirders”, that is, the people who use this app on their laptops or on their mobile phones. The venue was Christ University,  thanks to Dr P U Antony, Professor of Zoology, Christ University. 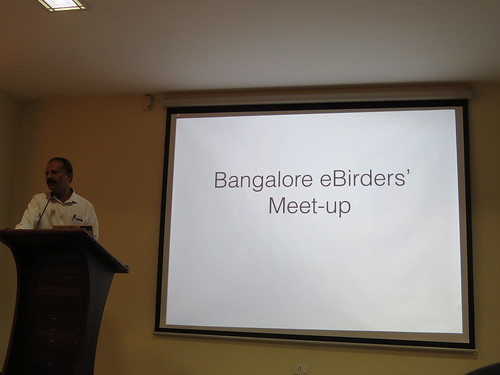 Dr Antony is also a member of the Biodiversity Management Committee of Bruhat Bangalore
Mahanagara Palike, and is the initiator of the “Green Army”, a student movement for conservation.

Dr.Antony then spoke about the initiatives he has been spearheading at Christ University. Many of the students of Christ University who were also present acknowledged his role in inspiring them. The “Green Army” that Dr Antony initiated seems well and thriving on the campus.

Ramit Singal, a noted birder who has produced a book on the birds of Manipal, then gave a short talk on how to distinguish closely allied birds in the field. This addressed a very common difficulty that birdwatchers face, and the audience participated animatedly  in the discussion, making it a very interactive presentation. 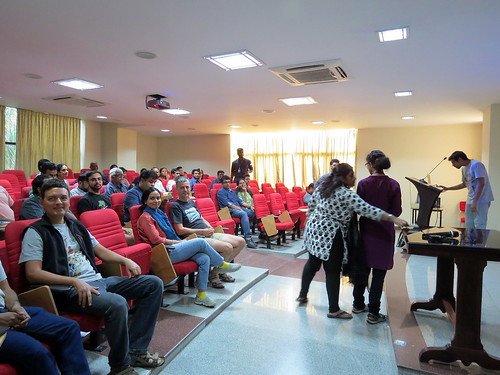 The gathering broke for tea and biscuits, and reconvened to participate in a quiz on bird data and eBirders, set by Ramit. This was a very lively quiz, with Suhel telling the audience that the prize would be “glory”…an apt term to use in the gathering using an application which is non-commercial in nature.

Suhel  ended the meeting in time to ensure that the members could battle the traffic and get home in reasonable time.