As I conducted the World Campus Bird Count (it happens throughout the world between Feb 16 and 19, 2018) the sighting of the day was seeing a line of young trees at the campus of the Indian Institute of Management, Bangalore (IIMB).

The trees did not, to a casual obsever, look very pleasing. With their crowns and branches lopped off, and wrapped around in hay and chemicals, they were not the stuff of leafy, shade-giving, bird-nesting dreams.

But since I had seen these trees, growing along Bannerghatta Road, being wrapped in preservative chemicals and wrapped to keep them alive, and was told that they were being transplanted, it was a delight to see the job actually done!

Well over a month after the transplantation, I found at least this line of trees alive, and bearing the first few fresh leaves.

It was a refreshing sight for someone who has often fought losing battles over cutting down trees for road-widening, which I oppose, and for the Metro, which I cannot oppose, as it is public transportation that is sorely needed in our city!

I am sure that with the care of the excellent horticultural staff at IIMB, these trees will survive and thrive. A green salute to this initiative! 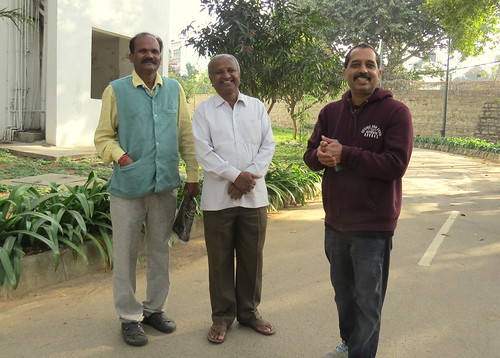 Mr Subbanna, Mr Mayanna and Prof Shainesh, three of the people who actively look after the greenery on the IIMB campus, with a team of helpers.