Last week, some "columns" made of plastic (of terracotta look, complete with fake "burnt" patches, with rectangular frames on top for advertisements, suddenly made their appearance on M G Road.

All the newspapers picked up on this uglification of the scene, and also remarked on how these ugly things were supposed to be beautifying Bangalore but were actually put there to fetch further revenue for BBMP (which seems to have developed a bottomless thirst for raising cash) through ads in the rectangles. The columns were impeding traffic and Deccan Herald pointed out how one pedestrian had been injured by a badly-placed one.

On Saturday, I found a whole lot of them piled up at Mayo Hall. 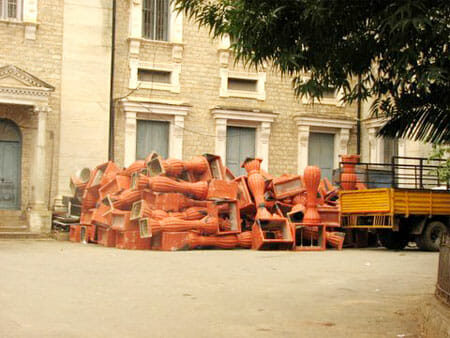 How much was spent on these "pots"? Who gave permission to put them up? Who gave the order to move them away? Why is BBMP so opaque about its spending, and why is it not accountable to the general public about such wastage of money and effort?

Would it be frivolous to file a PIL about the wasteful, profligate ways of the BBMP? They don’t seem to have money to repair the pavements but are perfectly willing to squander money on such ugly, foolish things….