Though Independence Day is only on August 15th, the preparations for one of the two annual flower shows that this City has, has already begun.

I went to Lalbagh early this morning, and the Glass House area was agog with activity. Several vans and lorries had been parked close by and flowering plants were being "downloaded"…. 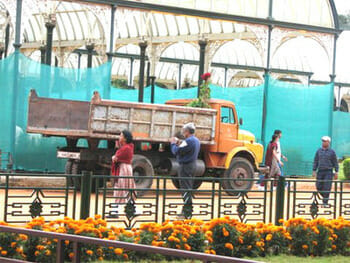 Some of the tables required were also being brought in.

Officials were busy discussing how to put up the displays:

The staff were busy with the work:

The stalls outside the Glass House are all ready and waiting for occupants:

Stalls are getting ready outside the Glass house (Pic: Deepa Mohan)

Several types of flowers were being brought out:

Some of the displays were getting filled in with plants and flowers:

Displays getting filled with Plants and Flowers (Pic: Deepa Mohan)

However, some displays were already in place. Here’s the "Heart":

Here’s the Double-Headed Eagle, insigina of the Wodeyar Royal Family: 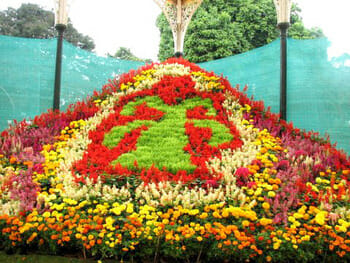 But even though preparations are just starting, the camera contingent seems to be out in full force!

Here are a male and a female of the species, Homo camerensis, hard at work:

Someone getting some more detail:

Concentrating on the macro shot!

It didn’t matter what the camera was, as long as you captured the beauty of the blooms!

And of course, one has to check if the image is good: 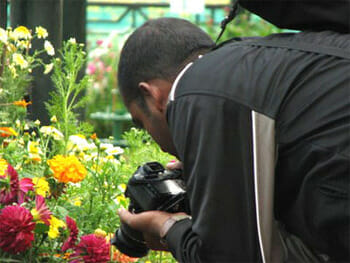 Let me close with one of the regular beauties of Lalbagh,

And tell you to go early for the exhibition, because…the early bird gets the worm (or in this case, whatever food it is!)

Enjoy the Lalbagh flower show…but it does occur to me, why do other localities not have their own flower shows? Why must it be restricted to one place, twice a year?