I had to visit the

a small nursing home, in Jayanagar 4th Block, and it was a pleasant discovery to find a nameless, boardless canteen, tucked away under the road level! 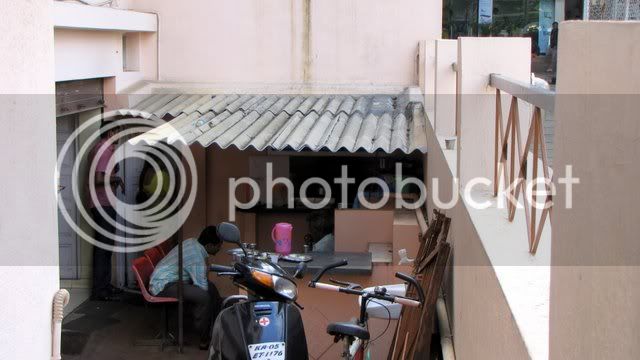 The canteen serves both breakfast items such as Uppittu and Idli, as well as rice items for lunch, and tea and coffee, starting from about 6.30 am to about 8pm, every day.

It is a great boon for the families of patients who have been either admitted to the clinic, or are even waiting there for consultations or tests. The rates are extremely reasonable…so much so that I found many people in the locality frequent it as well!

I was most impressed with the way fresh food is prepared and served in such a very teeny space….leading me to dub this nameless canteen, "Can-teeny".

I spoke with Mr. Shekhar, who has been running the canteen for about 6 years now. He and a helper manage this tiny space, which has yet, a grinder, a little sink, and space enough for Mr Shekhar to make and serve all these dishes!

You can see how economically space has been used, in this view into the door of the canteen.

Here’s Mr Shekhar himself, at the serving window; behind him you can see that in spite of the space constraints, there is yet a small niche where a lamp has been lit in front of a picture of a god, and a little garland of mallige has been set in a daily act of worship!

Mr Shekhar says that his own breakfast does not happen until nearly 11 am, and he has lunch only around 4 pm! But he provides a much appreciated service for a lot of people who come to Shanthi Polyclinic for various reasons, one of them being just to taste his food!