The Indian National Trust for Art and Cultural Heritage (INTACH) had organised a cultural program in the beautiful lawns of the Bangalore Fort on April 18th, the World Heritage Day.

It was an evening affair. Though it was the usual busy traffic outside, the atmosphere inside the Fort was surreal. The invitees were soon absorbed in the colourful photo exhibition ‘Portraits of Bangalore’, compiled by Bangalore Weekend Shoots (BWS), a group of photography enthusiasts. The collection was later released as postcards.

The function had many visitors – both young and old – spread out on the green lawns of Bangalore Fort.

As the program was yet to begin, I couldn’t help but notice this ladder. on one corner of the fort. It being a heritage day and learning a lot of history during a walk earlier that day, I imagined soldiers scaling the fort. In all probability it was that just there for fixing lights for the event.

The program started with the chief guest, former minister, Leeladevi R Prasad speaking on the occasion. She gave a short talk on heritage and culture the importance of preserving what is ours. She also appreciated INTACH efforts towards heritage conservation. 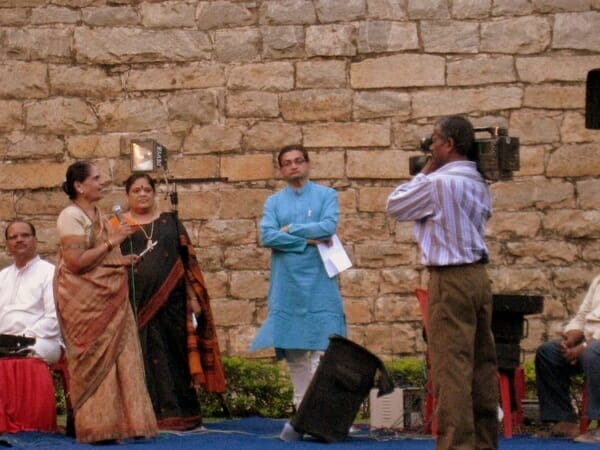 The other guests were writer Vikram Sampath and Mr Murthy, the owner of ‘Select’ bookshop. 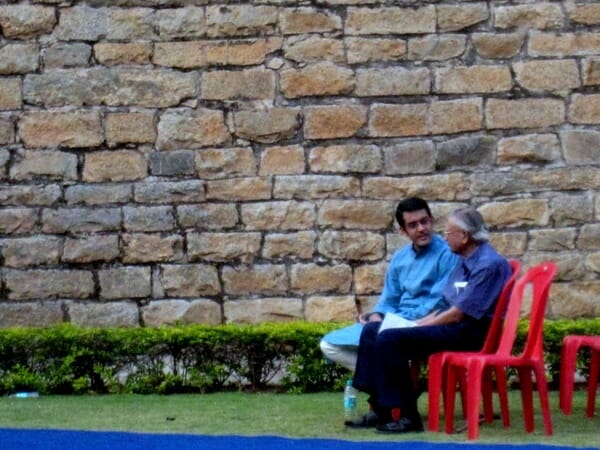 Vikram Sampath gave a ten minute narration on Bangalore. He explained with facts and dates on how the city was always a commercial centre and was earlier known by names such as ‘Mangala puri’ or ‘Kalyana puri’ suggesting its prosperity or its large number of lakes (kalyani). He spoke about a city that was ruled by different dynasties from Ganga to Vijayanagara’s Kempegowda periods and later by the Marathas, the Mughals who then leased it to the Wodeyars and finally the British.

This was followed by some enchanting songs by Vijay Havanur and group. 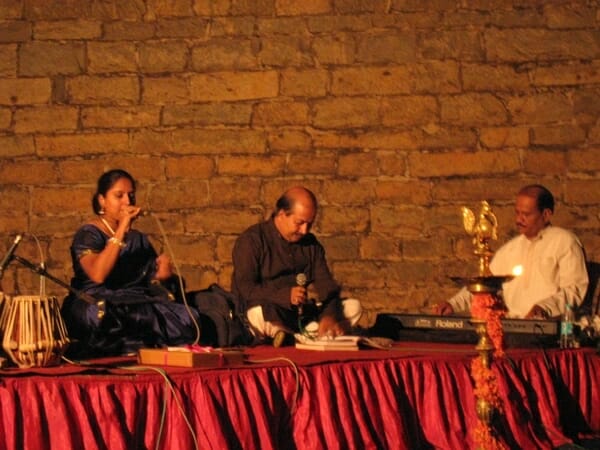 To conclude it was an evening well spent; a leisurely stroll over an ancient fort, visit a photo gallery, hear to some absorbing tales and attend a classical concert – all a few metres away from the busy KR Market!