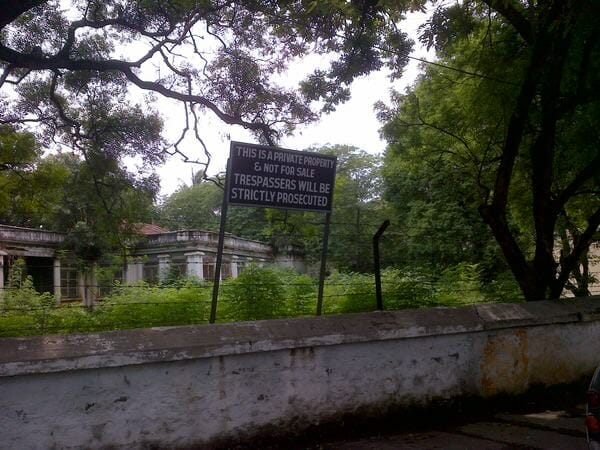 The sign says it all: An bungalow in the Cantonment area

The quaint names, the tree-lined streets, the quiet roads and most important, the bungalows make the Cantonment area, a sure-shot target for real estate ‘developers’.

My husband and I moved here ten years ago because of this old world charm–we loved the serene areas in and around Cooke Town, the streets adjoining Mosque Road, the hidden gems around Richards Park. But now standalone homes, of every size, from stately bungalows to matchbox-shaped houses, are morphing into apartment buildings. And the end result is a sandwiched existence.

Take Davis Road for instance, where I live. Our building is a co-development project, a pact between the original owner and a builder (thankfully, the original structure was not a bungalow). Over the years, more co-development apartments have sprung up around us. In fact, now the buildings are so closely packed together, that we residents are forced to unwillingly participate in each other’s joys and sorrows, listen to each other fight and make up, cry or celebrate. A rather uncomfortable way to live, really.

On the other hand, life is infinitely more difficult for those who own houses and bungalows (with the term ‘bungalow’ referring to homes with the distinctive architecture of old Bangalore–latticed porches, monkey tops, high ceilings, verandahs and a garden/yard). Because often, builders try to get owners to sell, even when they don’t want to. I witnessed this first hand, many years ago, when I had gone to visit the late (retd) Admiral Dawson. Admiral Dawson’s beautiful bungalow off Viviani Road, is just a hop and skip away from Richards Park. A piece of old Bangalore history and unfortunately, also prime property. That day, a builders’ scout/agent was there, urging the Admiral to sell. The elderly gentleman had refused point blank but the agent was incredibly persistent. And that was years ago.

Now the pressure on owners is much more intense. Because Cooke Town and it’s surroundings are now among the priciest areas in Bengaluru. Well-designed, spacious 10-year-old apartments here command prices of Rs 1 crore to Rs 1.5 crore so you can imagine how lucrative a business it is to build new apartments. So harassed owners have been putting up little notices on their gates and walls that declare ‘This House is Not For Sale’. Such notices are now more visible than ever–I spotted them on a bungalow between Moore and Robertson Roads, on private property near Spencer Road, and on a majestic bungalow near Thom’s Cafe.

In the Cantonment area, when owners are away for a while, their homes slowly become overgrown with vegetation. These bungalows then end up attracting the aggressive attention of builders’ agents/scouts. In some cases, the owners get easily intimidated and are pressured into selling their property. In other instances, the owners do want to move on, because they believe living in an apartment is safer then being on their own. So the situation is a complex one.

Not a new problem

This clash of commerce and culture, as it were, is not new. The disappearance of the city’s distinctive bungalows has been a source of concern for years. In 1994, the late former Chief Secretary, T.P.Issar (old copies of his book ‘The City Beautiful’ are available for $25 to $70 online!); the late Bangalore Urban Art Commission Chairman, M.A.Parthasarthy; and the late culture activist, Naomi Meadows, wanted a state heritage conservation commission set up to “selectively preserve important heritage sites in Bangalore and elsewhere.” In 2002, I had the opportunity to speak with Mr. Issar while reporting on heritage conservation for The Hindu newspaper. Mr. Issar stressed that he and the others had sought special focus on private property such as old bungalows in the city. “Now they (bungalows) are almost wiped out. We thought the commission could acquire at least 10 of them as symbols of a culture gone by,” was what he said, then. For my original article in The Hindu newspaper, click here: http://www.hindu.com/2002/06/14/stories/2002061408630300.htm

Nothing came of the trio’s recommendations and I don’t know if such a commission would have actually been effective. But don’t you think the three heritage enthusiasts would have been anguished at the state of the city and it’s bungalows?