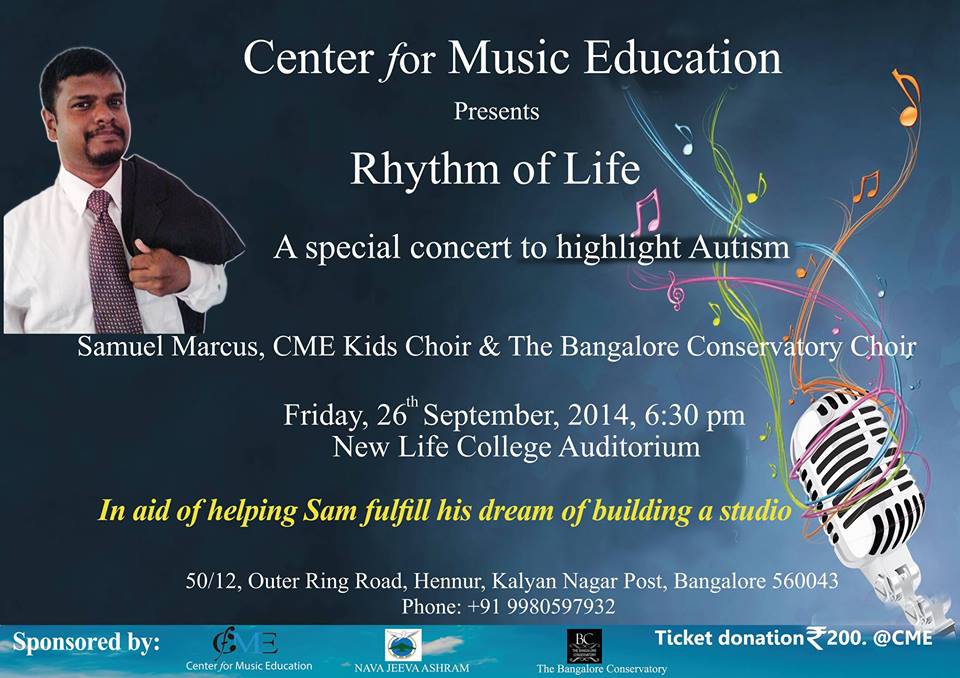 If music be the food of life, play on…

So said the Bard. What if music is life to you? What if, only the glorious notes and the wondrous chords make sense, what if everything else to do with everyday living, means nothing? What if you are Samuel Marcus?

Samuel, or Sammy, as he is called, is 27 years old. He has an older sibling and he has loving parents. And he has, in the words of people who have heard him, the ‘voice of an angel’. Sammy, you see, is blessed with a musical talent so great, that music is life to him. He is also autistic.

What is autism, you ask?

According to the Bangalore-based Autism Society of India, “autism is a complex neuro developmental disorder that manifests in children by the age of three. It has a debilitating effect in the areas of communication, socialisation, cognition, imagination and intuitive thought, and it severely inhibits a child’s repertoire of interests and social interaction.”

But Sammy is, in a sense, different. He has friends, many of them. In fact, when he studied at The Bangalore Conservatory (a city-based music institute that offers training in Western classical music theory, history, performance and music education), his classmates looked out for him, cared for him. Because he was the only one among them with ‘special needs’.

Today, he has not only honed his musical talent, he also teaches music. His proud mother Annamma Marcus says Sammy teaches piano, guitar, keyboard and vocals to children at the Centre for Music Education (CME), which is another wing of The Bangalore Conservatory. And his dream is to run a music studio one day.

To help him and his family realise that dream and to raise awareness on the special genius inside people like Sammy, The Bangalore Conservatory and CME are together organising a fund-raising concert today evening. The event is titled ‘Rhythm of Life–A Special Concert to Highlight Autism’, at New Life College, Outer Ring Road, Hennur, Kalyan Nagar Post, Bangalore – 560043.

Because sometimes, a ‘disability’ is just a stepping stone… to harnessing truly special abilities.