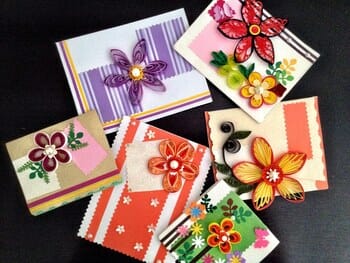 Some of the cards children have made for the carnival

Sometime last year, five women were chatting over a cup of coffee. In the course of their conversation, the five (part of a moms’ group because their children attend the same school), realised they shared similar beliefs–that they all believed passionately in making a difference to the lives of those less privileged. And that, to do this, they had to “become the change, they want to see”.

Now, this is a group of highly qualified and motivated professionals–there’s a Chartered Accountant, an MBA, an interior designer, a corporate professional, and a HR consultant in this group. These are all women who work part-time, apart from being multi-tasking moms, all the time. So naturally, they had a plan to put into practice. They decided to start something. With Rs 10.

The moms–Namrata Mundhra, Smita Shah, Sonal Lenka, Nidhi Sarawgi, Samridhi Jain–all of whom incidentally, live in and around the Indiranagar area, formed an organisation that they named ‘Powers of 10″. The idea being, that each will contribute Rs 10 a day. A simple idea. And easy to do. More important, they decided to get their children involved in every cause they took up.

The idea caught on. Other moms, friends, parents and acquaintances joined in. Today, they have over a 100 members. Each member puts in Rs 10 a day. And commits to contributing that amount for a minimum of three months. With the funds thus collected, Powers of 10 takes up projects they believe in (after vetting said projects/causes thoroughly). “People want to help, to contribute, to volunteer, but often, the worry is that the cause is not genuine or that the money collected will not go to the right person. We ensure that every cause is thoroughly investigated,” says Namrata. Of course, sometimes, the cause is clear for all to see. For instance, last year, Powers of 10 helped raise funds for families evicted in Ejipura. “Our children helped too by setting up lemonade stalls, and other similar activities,” explains Namrata.

They also have been working with Enfold, a non governmental organisation, to hold workshops and awareness programmes on prevention of child sexual abuse.

And then, this September 6, Saturday, Powers of 10 is holding ‘Kids for Change–A Carnival for All’, at 3rd Main Childrens’ Park, Defence Colony, Indiranagar, to raise funds for children in dire need of medical help. “We have joined hands with Delhi-based Genesis Foundation, as they have a track record in the area of supporting medical intervention,” explains Namrata. Two children have been identified–a toddler less than two years old with a congenital heart defect, and a ten-year-old with a curved spine, a condition called scoliosis. Both children will undergo surgeries (with the funds raised) at the All India Institute of Medical Sciences in New Delhi.

See what kids can do

The carnival has everything a fun fête should have–from stalls with delicious desserts and mouthwatering eats to story telling sessions, yoga, dress up booths, hair braiding/nail painting, and much more. But the nicest thing about the carnival, is that it is children who are the movers and shakers here. “Our children are putting up craft/food/games stalls, they’re making cards and posters, they’ve donated old books, they’re making origami products/diyas, and they’ll set up lemonade stalls and sell pop corn. They are involved, every step of the way,” says Namrata proudly.

“The beauty of Powers of 10 is that it has brought us all together. It has made us into a community that cares,” she adds.

And to think it all started with a cuppa.