‘Opportunity cost’ is defined as “cost of a missed opportunity”.

We may never know the opportunity cost of missing out on suburban train in Bengaluru.

The amazing video about Mumbai local aka suburban train is now going viral. People heard about Mumbai local and many experienced it, but the video shows what a powerful system they have built over decades. I remember watching those old Hindi movies where the actors are seen cutting vegetables on their briefcases while commuting!

Since I’ve been answering various questions on several threads, I figured I might as well make a post about this based on what I learned from others and seen. My ulterior motive, of course is to get YOU to volunteer with us, in CfB

We may never know the opportunity cost of missing out on suburban train in Bengaluru. Old timers recall citizens demanding it as early as 70’s, 80’s. Serious efforts were made in the 90’s project reports created and even approved and the 6 time Bengaluru South MP says publicly that he has been fighting for it for 28 years.

Why did we miss out on suburban train all these years?

No one can say for sure. But it is obvious that the politics between center and state governments is a big obstacle. There were technical issues too with respect to signaling and managing both long distance and local trains with depots and yard space etc. All those issues have been ironed out almost a decade ago, to the best of my knowledge, with a comprehensive project report done by RITES (Rail India Technical and Engineering Services) the official consultant of Indian Railways.

The report has multiple phases and estimates nearly 25 lakh daily capacity at the end of all phases. Then there were issues of funding. Who pays for what? In all other cities where suburban trains exist, the Indian Railways was sharing the cost with the local (state) government. But two years ago a ‘new’ suburban policy was introduced – just in time for Bengaluru

🙂 – which basically says the cost of land acquisition and operational costs must be taken up by state – in other words, while Mumbai gets tens of thousands of crores for upgrades and all that, Bengaluru suburban train must adhere to new rules! That delayed things even further.

In the meanwhile, we at CfB, decided to create awareness about this long pending project, as a clear alternative to the Steel Flyover (and now to the Elevated Corridor) and started the campaign #ChukuBukuBeku in December 2016. In typical CfB style, we gathered hundreds of people on every platform between Cantonment and Whitefield, and thousands landed on that Sunday 16th December in Whitefield station that looked like Kumbh Mela as one tried to get on the foot over bridge.

The sensational media coverage – including live video by national and state electronic media that traveled along with us – put the project back on the map – for all politicians. Several other campaigns later, all parties agreed this must be done, they included it in their manifestos, State government gave Rs350 Crores, Center declared 17,000 Crores, PM Modi himself made this part of every election speech in Bengaluru. But things still remained on paper.

What actually needed to happen was an Special Purpose Vehicle (SPV) needed to be formed – which will draw up the suburban train system, implement the RITES report, do the necessary infra upgrade, and basically start running services as suburban train – you may not know this but today, thousands of people use train to commute locally from Kengeri to Carmelaram, from Hosur to Majestic on regular passenger trains, some of which are MEMU/DEMU type (no berths, but sitting and standing coaches). If you go to Cantonment station any evening around 5.30pm, you will find the station thronged with people trying to catch a train to Whitefield after a day’s work in the city.

Apart from SPV, the other big thing that will change the fortunes is the long-pending doubling of railway line between Cantonment and Whitefield. The irony is this project has been long approved (notwithstanding suburban) and yet due to some minor clearances pending, it is stuck for a decade!

Last week, we came to know that the Chief Minister is holding a meeting with Railways about Suburban, and like we did so many times before, we showed up uninvited at the CM’s office. Some 16 of us, gathered there and waited for three long hours, but denied an opportunity to meet the CM or the Railway folks – the good news is the CM announced that the SPV will be formed within a month. We are not celebrating yet, obviously

Here are some posters, flyers we made during the #ChukuBukuBeku campaign. They will make you understand how important this project is. For metro nearly 24,000 crores have been spent so far, if I’m not mistaken, and it is being built ground up whereas for suburban, 180 kms of railway lines already exist and more than 40 stations within BBMP limits! Imagine the opportunity cost! 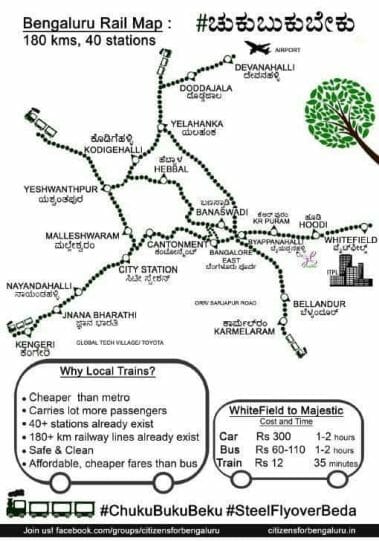 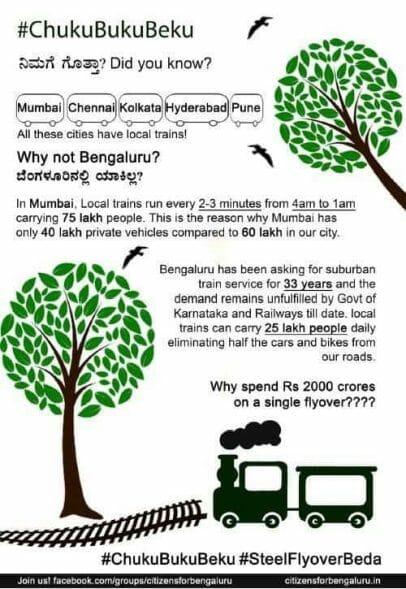 For all the people that call you the #BedaBrigade, tell them, this is the biggest BEKU campaign the city has seen and we will not rest until it happens.

We got this far because of so many selfless people fighting for it, countless hours spent by hundreds of volunteers. Kudos to every single one of them! You know who you are!

come join us, in this fight for our city.

We can do it, together. We believe in #PeoplePower