We are all frustrated about lack of urban governance – garbage, pot holes, flooding, dengue, traffic, we bear the brunt of it all, day in and day out. Almost every week there is a protest some place or other, a human chain, a petition, signature campaigns. WhatsApp groups are born every day for some cause or other. Citizens go to MLAs, MPs, Deputy Chief Minister, Chief Secretary, anyone willing to listen to their complaints. Media events like ‘Jana Spandana’ are housefull with lots of people waiting to air their grievances.

But all these – local issues – are supposed to be handled by the city government, also known as municipal corporation – in our case it is the BBMP – but not many of us know what exactly is BBMP. How does it work? Who runs it? How can we as citizens engage constructively with local authorities to fix small issues that cause pain? 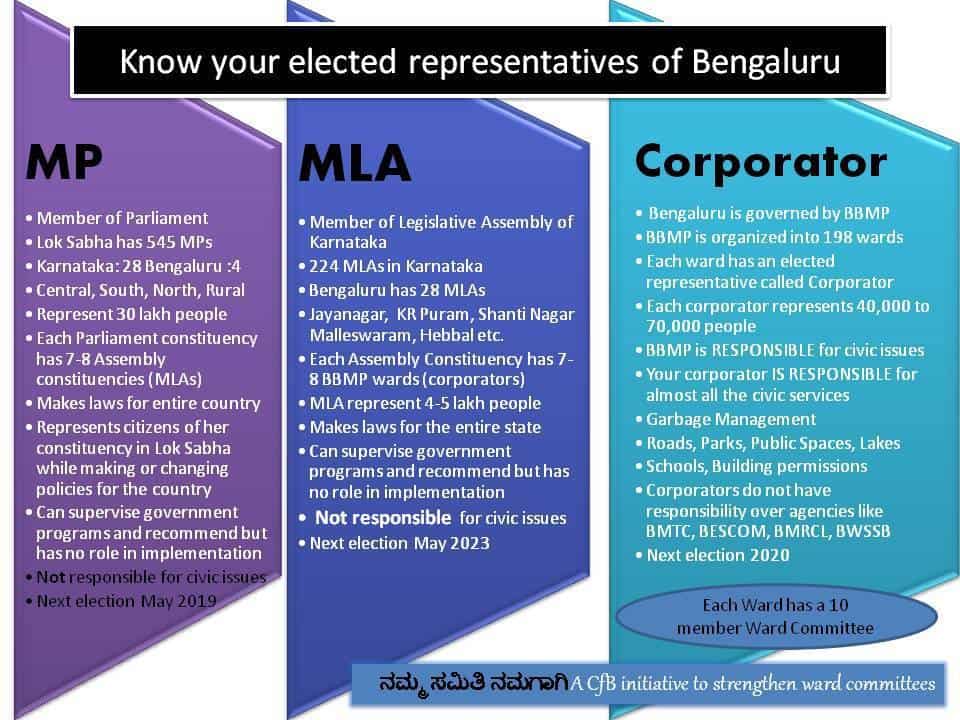 With a population of 1.3 crores it is nearly impossible for any individual however powerful she or he may be to fix things without many others, including citizens collectively owning responsibility and exhibiting better civic behavior. But there is a far better chance of success when problems are highlighted and resolved locally, not in Vidhana Soudha, not even in Head Office of BBMP, but your own local BBMP ward office. Yes, there is one for each of the 198 wards.

First step to constructive engagement is awareness. When there is awareness, more people come forward to engage locally. When more people come together, the decision makers see the numbers. Numbers get them to act more than anything else. If we learned one thing in CfB, that is about mobilizing numbers. When more of us ask for something, the chance of it happening are higher. As simple as that.

Every day people in power are making decisions on public spend, big and small. Local and Regional. They focus on mega things like concrete infra projects and quietly allocate huge sums to things like advertising while shortchanging critical things like education and healthcare year after year.

The biggest decision of all has to be the annual budget exercise. That’s when our government declares how it is going to spend nearly ₹2 lakh crore (you read that right) if you take away salaries, operational expenditure and loan interest payments etc that’s still more than one lakh of crores they are deciding on what to do! Nobody makes memes and angry posts about why government schools and hospitals and rain water harvesting and lake rejuvenation did not get adequate funds. The rate at which government gives funds to Bengaluru lakes will ensure they will remain cesspools for the next hundred years! And while thousands of crores go to metro nothing is ever given to buy more buses! Extremely frustrating!

The city (BBMP) budget is another major process that hits really close to home for all of us in terms of garbage, roads, parks. BBMP budget for this year is ₹9300 crores! Nine thousand three hundred crores. The single largest spend is ₹1000 crores for garbage management alone. How does that translate to actual work done in terms of building waste processing units, collection and transport – is one of biggest unsolved mysteries, scratch that, biggest scams of the city – we need an inscription stone to record it! How much of it comes to your ward and your street? Nobody really knows and those that know, won’t tell!

When we proactively and effectively insert ourselves in the budget processes we can actually make a real difference. I know it is easier said than done, having tried myself.

But there is a glimmer of hope. It is called ward committees. What does it do? Here’s a list: 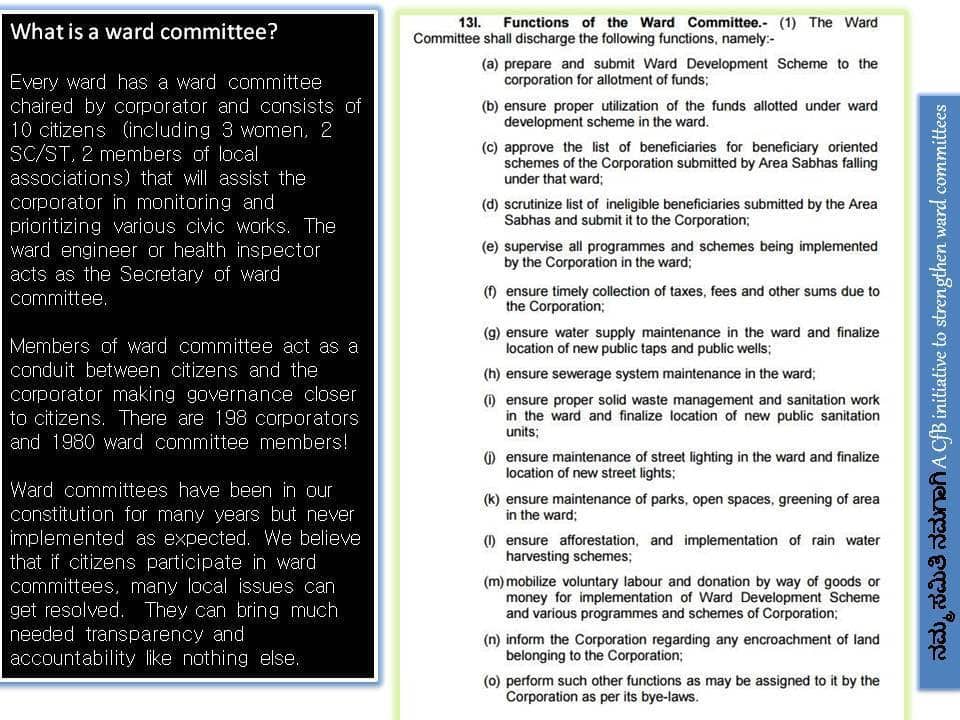 Ward Committee meetings offer an unprecedented opportunity to all of us because the topics of discussions are not abstract things but stuff we see and feel every day. If more of us participate actively we have a chance to discipline the system.

They say sunlight is the best disinfectant.
I say ward committees can bring in much needed sunlight into our city finances.

Here’s a small attempt to create some awareness about local government. These are based on conversations I had with many people including volunteers. If you think it helps, please share with friends. If you want more info, let me know. We will make this available in other formats like videos etc for wider reach if there is interest.

The ward committee round table is being organized by CfB on 27th November – we would like all of you to be there. It is a great way to strengthen our BBMP. You can meet our BBMP Mayor Gangambike Mallikarjun and BBMP Commissioner and many corporators and civic leaders there. 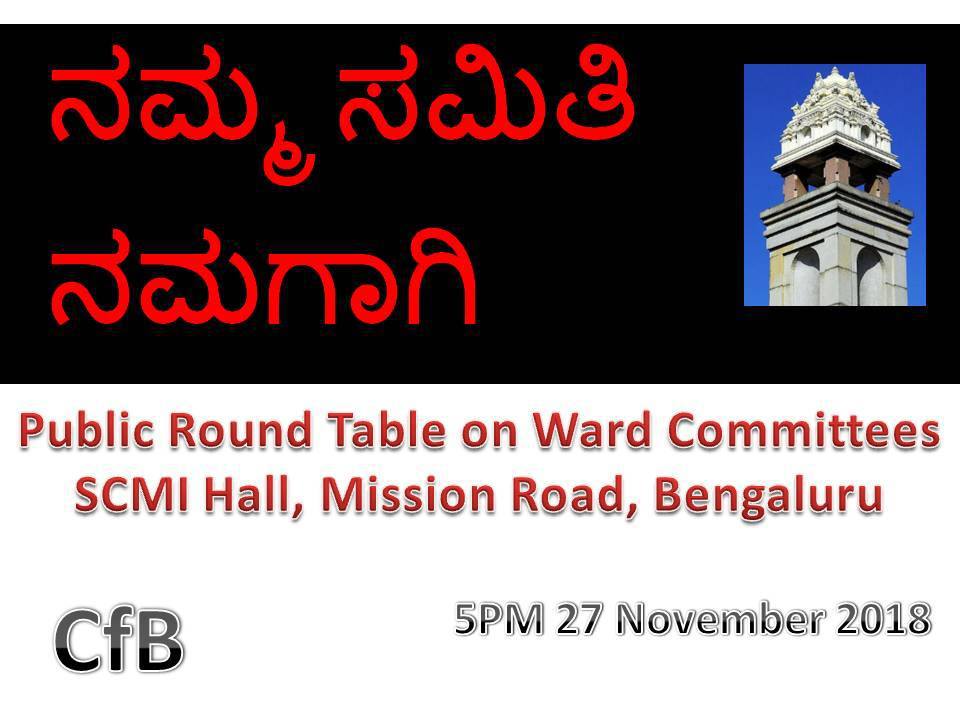 Here’s inviting you to join us in this endeavour to empower ward committees. Perhaps it is the systemic change we have all been longing for – more than 110 people signed up already- what about you?

Do share with folks that are actively involved in their communities and trying to make a difference.