Did you notice that someone fixed that black spot on your way to work and it now looks nice with a little bench and simple art that makes the place walkable and pleasant on the eyes?

Did you come across pictures on social media of people sweating it out and cleaning lakes on a Sunday morning?

Do you know someone that teaches and helps out in the local government school?

Did you notice there was a massive protest to save trees on Jayamahal road and a thousand people got on the streets? Did you know local residents were filing RTIs, writing letters, meeting officials behind the scenes before it became a protest?

Did you notice that right now there is a group of concerned citizens trying to save trees in the queens road veterinary hospital ?

Have you met the senior citizen in your park who takes care of composting and upkeep of the park on a daily basis to keep it a happy place for local residents?

Did you ever sit in a small meeting along with your neighbors to learn about waste segregation at source from fellow citizens that are working with BBMP to keep our city clean?

Do you know every day some place or other in our city a group of citizens are getting involved locally, one way or other, making a difference to their neighborhood that they can see and feel?

Did you wonder how did 8000 people gather in one place for the human chain #steelflyoverbeda?

Did you know that much before the steel flyover, people got together and stopped wasteful projects in Koramangala and elsewhere?

The people that do this are just like you and me. Regular people with jobs and other responsibilities. They have come to the realisation that talk is cheap, actions speak louder. These people that partner with their local Corporator and the health inspector (to bring the truck when the cleanup is done) and work closely with various city agencies are indeed an asset to our city.

Does it bother you that the system is so broken that people need to get involved in getting simple things done while there is an elected body that runs the city and has an annual budget of Rs 9000 crores and all the resources in terms of personnel and equipment?

Do you feel that the good work citizens do must be scaled up because our city is huge with 1.2 crore population?

In my travels over a decade in this city I have come across hundreds of people that are committed and passionate and bring their professional expertise and learn about things like composting and rain water harvesting. I am often amazed at the level of understanding ordinary citizens have about mobility, road design, city planning and the laws that govern it.

Does it not make sense for these every day unsung heroes to become part of the ward committees of BBMP?

If you find yourself asking “what is this ward committee?” Here is the simple answer : a ward committee is a group of 10 residents of a ward that works with the Corporator and the corporation (BBMP) for the betterment of the ward. They have monthly meetings with Corporator and officials and review projects and give feedback on behalf of people of that ward. 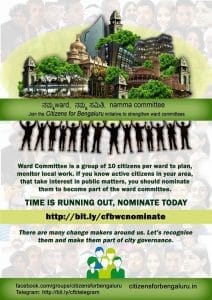 Their presence in ward committees will go a long way in making right decisions for the ward and bridging the gap and building trust between the government and the citizen.

We request you to think of all those people and nominate them to get on ward committees. Most of these people are reluctant warriors and shun the spotlight, but it is time we publicly acknowledge their work and ask them to be formally engaged when there is an opportunity – which is built into our law but never gets implemented.

We request you to spread the word so more people are aware that there is such a thing called ward committee and now is open for active citizen participation.

We invite you to do your bit in strengthening our local government which in fact is the government we see and experience every day.