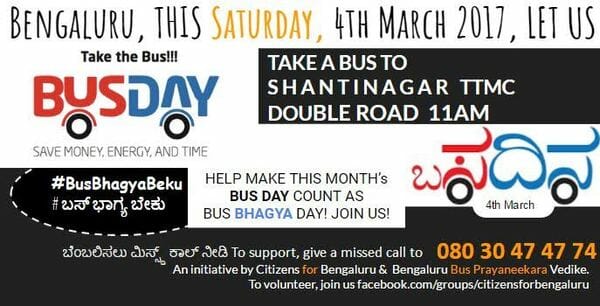 Citizens for Bengaluru (CfB) and Bengaluru Bus Prayanikara (BBPV) have initiated a public campaign – #BusBhagyaBeku – seeking ‘Half the Fares and Double the Fleet’. CfB and BBPV met with various organisations and conducted commuter surveys at garment factories on Mysore Road and at Shivaji Nagar, Jayanagar TTMCs and at Majestic to understand their concerns and to seek their support for #BusBhagyaBeku.

CfB and BBPV, call upon all citizens of Bengaluru to take a bus to Shantinagar TTMC on Saturday 4th March at 11AM (incidentally, the monthly Bus Day) in an expression of support for public transport and ‘#BusBhagyaBeku’ to increase buses and reduce fares. We request all civic and environmental groups, RWAs, corporators, MLAs, distinguished citizens of our city to join this movement and take a bus on Saturday.

While the population of Bengaluru doubled, the number of buses remained same. In fact, the number reduced from 6431 (2012-13) to 6141 (2016-17) which is a stunning 5% decrease. Bus travel used to be 55% of all traffic in 2005, by 2015 it became 47%. The number of private vehicles increased by 50% (41 L in 2012 to 63 L in 2016) This led to significant decrease in air quality putting our children at high risk and the city is heading towards disaster unless we act now. More buses and more people using the bus is extremely critical to save our trees and environment. We must expand bus service to outer areas, deploy smaller buses in local areas and improve connectivity & frequency thereby encouraging more people to shed private vehicles and take the bus.

Unlike other cities BMTC does not get any tax breaks on diesel or Motor vehicle tax, Road tax from the state government.  BMTC does not get any operational support either, in Chennai, the Government of Tamilnadu, pays for employee salaries.  As a result, BMTC has become the most expensive public transport in the country after seven fare hikes in the past three years making it unaffordable and a luxury mode of travel for daily wage earners. Lakhs of fellow citizens are unable to use the bus to access education, livelihood, health care or for leisure even. BMTC is the backbone of Bengaluru and yet out of reach for the common man and woman.

We demand the State Government to declare ‘Bus Bhagya’ in the upcoming budget, and grant financial support to BMTC to procure more buses and reduce fares. We believe every rupee allocated to strengthening public transport is a worthwhile investment in public health and leads to traffic decongestion and helps negate the destruction of Bengaluru.  Studies show a single bus can replace 50 cars and 200 two wheelers and increasing the buses and reducing fares will encourage more people to take the bus instead of private vehicles. Our transport system must focus on moving people, not vehicles.

In addition the Government must build infrastructure that favours buses instead of encouraging unscientific mega projects, constitute regulatory body involving elected representatives from BBMP, BMTC workers and commuters. Make provisions in the budget to pay arrears and DA due to BMTC workers. Introduce parking and congestion fees for private vehicles to generate funds that can be transferred to BMTC. The Government must create a BMTC corpus fund with an amount comparable to that being spent on Metro.

We look forward to your support in making the ‘Bus Bhagya Day’ on 4th March 2017, successful in raising awareness about our bus service & strengthening BMTC to save our city from pollution and traffic congestion.

A BMTC conductor who doesn’t have change is a victim of BMTC too!
10 reasons that discourage me from travelling in BMTC buses
Why can BMTC bus stops not display bus route numbers?
‘BMTC and BBMP neglecting differently abled’
With fare hike, BMTC helps people maintain better health!