A few days ago I was passing through Perambur Barracks Road (Chennai 600007) near the Sub Registrar’s Office, when I happened to notice several manhole chambers (part of the storm water drain) encroaching upon the pavement on one side of the road. These were constructed in a way that caused obstructions to pedestrians at regular intervals. Because of this  the pedestrians had to either walk over the obstacles or in the middle of the road and it was a case of being stuck between the devil and the deep sea.

Strange as it would seem, further chambers were being newly constructed. Given the shoddy work that was being done, I could not stop myself from walking up to the workers to enquire why they had increased the height of the chambers instead of keeping it with the level of the pavement. It was a standard response, we are only doing what we have been asked to do.

Subsequent to the complaints lodged I received calls from the concerned official. I was informed that the decision to increase the height of the chambers was taken in order to curb illegal parking of cars, two wheelers and other vehicles on the pavement. He added this was only as a temporary measure and the obstructions will be cleared once the situation changes.

His explanation was indeed very absurd and difficult to digest.

How can those within the local administration resort to doing something wrong in order to stop people from breaking the rules?

If they had to stop the vehicles from encroaching upon the pavements, they could have always considered the option of  pedestrian guards or bollards along the pavement on Perambur Barracks Road, as is being done in other parts of the city. 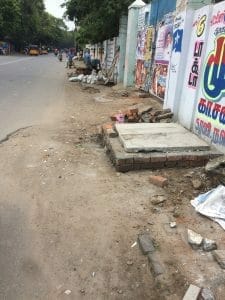 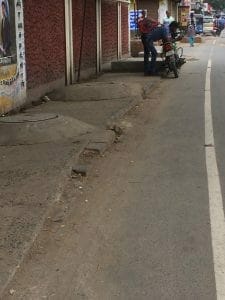 Encroachment and obstruction of the pavements is something that we have tolerated for a long time. In the recent years the Greater Chennai City Corporation has been erecting granite pillars, stainless steel railings, etc along the foot path to curb commuters from riding on the pavements and to prevent encroachments. Though it was a very good initiative, it is also a futile attempt given the sheer lack of any civic responsibility within a major section of our society.

A few years ago the local administration installed pedestrian guard stainless steel railings along the pavements on both the sides of the Elephant Gate Bridge ( East End Only ). The condition of these railings as of now is very pathetic – images attached below. 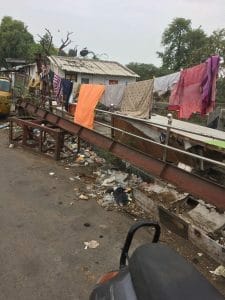 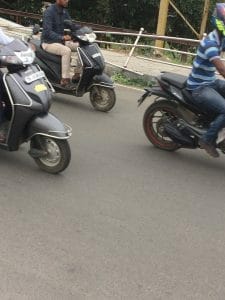 Not only two wheelers and cars, one can also see several mini trucks being parked on the pavements. 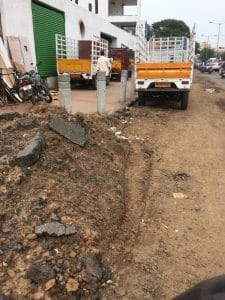 Pavements resurfaced with tiles and lined up with granite pillars are totally misused. Public spaces are encroached upon with installation of electrical transformers, telephone distribution boxes, stored pipes etc. 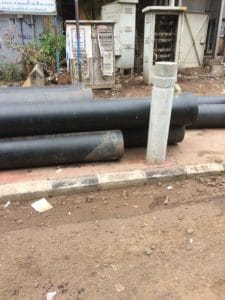 Pavements have also been encroached by “start up temples” and “commercial establishments” and it seems to be a free for all. 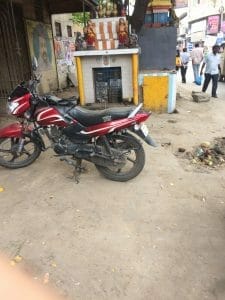 These are some questions which need to be asked :

Why is the tax payers’ money being wasted on such cosmetic and temporary changes?

What was the need for the pedestrian guard  to be erected when it was obviously clear that the Elephant Gate bridge was likely to be abandoned soon after?

Are those within the local administration getting their priorities right???

We the people also need to have some sense of social responsibility.  It will be a great disservice to the nation if we do not intervene when required.

Implementation of developments, in my opinion, has to be uniform and across the city. In the name of development, we are only getting to see cosmetic changes being made in select locations, that too in bits and pieces.

Only with large scale participation of like minded citizens will we be able to reclaim our lost pavements and ensure they are available for the pedestrians.