In my unending search for resources that familiarise children with the environment I had chanced upon the ‘Garrulous Gastronaut’ a few months ago. So it was quite a coincidence that my daughter was invited to a workshop titled, ‘Planting an edible garden’ recently held at Galleryske, Richmond Town.

Conceived and facilitated by Pushpi Bagchi, a young Illustrator & Visual Communication Designer from Srishti School of Art, Design and Technology, the three hour workshop was a fun mix of story-time, experience-sharing, eating some delicious food prepared from fresh vegetables and finally some hands-on seed sowing. See this for more details on the workshop.

What I found interesting was how Pushpi had taken her Graduation Project beyond merely a course requirement, like many of us tend to do. So I met her to understand how and why a young 20-something like her had got so involved with knowing more about the source of our food.

She says it all started with her having to decide on a theme for her graduation project. Around the same time she and a couple of her school friends (she is an alumnus of the Valley School, Bangalore) came together to start a Cooking Club that they named ‘Gastronauts’! The idea was primarily to catch up and spend the time cooking together since it was a new area for many of them. 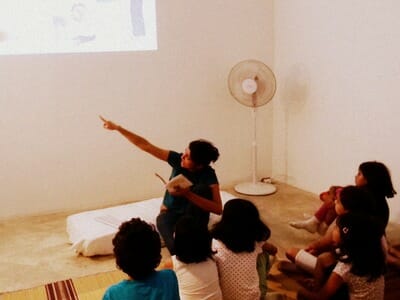 She confesses that till that point cooking and food was not something she had even given a second thought. The group decided to focus on the cuisine of a particular region for every such meet. Gradually they found they were confident enough to tailor the recipe (found online) and replace exotic ingredients with locally available ingredients.

As they delved deeper into the various ingredients, they also began avoiding packaged/processed products. They also watched a lot of food/cooking shows and Pushpi adds that watching Jamie Oliver’s show in particular helped her realise the importance of food and its impact on health.

She says this whole experience of cooking with friends also drew her attention to the possibility that many children of today may soon forget what an actual vegetable looks like since everything comes pre-sliced/shelled/peeled, etc. For instance they may not even recognise a whole garlic pod because they only see it as already peeled cloves. She decided to take this on as the theme for her project, specifically focussing on children.

Pushpi spent her initial time interviewing parents and her initial research and testing was facilitated with children at the Mallya Aditi International School, Nagarjuna Vidya Niketan and Mystique Montessori. These interactions revealed a whole set of challenges that parents/adults and children face today with regard to food.

A common yet disturbing thread was the disconnect with food. In many urban homes today, mealtimes are usually rushed and do not involve the entire family due to work pressure/school timings and other commitments. Cooking at home is often done by a hired help and festival goodies are commonly bought rather than prepared at home. While this may seem a generalisation she recognised that this as a growing trend and decided to focus on addressing these issues.

To do so, she zeroed in on a product kit called the Gastronaut’s kit that includes

The idea was that each of these serve as a tool to help the parents/adult and children get involved at every stage and learn more about the source of their food.

Subsequent to her graduation, Pushpi has conducted workshops for children at TRIO World School, Brainworks, iLeap Academy and is happy to facilitate more such. She feels this is one way she can reach out to more children and ensure that they remain well and truly connected with the source of their food.

→ For those interested in organising a similar session with children in your neighbourhood school/apartment complex or child’s friends circle you could contact Pushpi at pushpi_18@hotmail.com⊕