Restaurant at the end of the ORR was how Kanua was described to me. And unlike the Douglas Adams’ restaurant, food is the protagonist here.

Inspired by coastal and Konkani cuisine, the place serves some great food.

The open architecture and use of wood in the interiors transport you to a coastal home. The menu tells you the story behind Kanua and their philosophy. 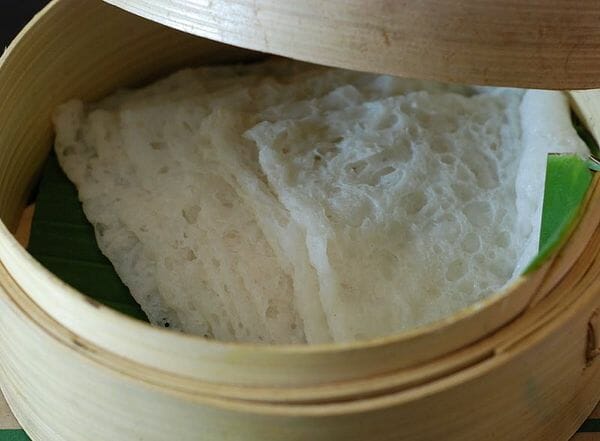 Kanua is the name of a rice variety that is now extinct. The menu says that this is their attempt at rediscovering, recreating and reviving, the lost cultural history.

And this, they do. The menu starts off with Kokum juice. An item largely relegated to Malnad Melas and health drink category. They also serve Paanak.

Kanua serves a very glamourised yam by deep frying yam chips and serving it with a tamarind dipping sauce (Soorna Kachri). Poddale Pohdi spices up the not so popular snakegourd. No Konkani or Mangalorean menu is complete without Biskoot Rotti of course. Roughly translated these are pooris stuffed with semolina filling.

For seafood lovers, the most recommended item is Kaane Tawa fry. Yetti or prawns are served three ways – tawa fry, rawa fry and stir fry. There is also the Goan favourite, pomfret-based, Maanji Recheado. Their Prawn biriyani is also very popular. Although, they do not serve seafood during monsoon, since it is the breeding season for fish.

Kanua Ghee roast, made of chicken cooked in more than generous amounts of ghee, has to be the most recommended item on the menu. Not for cholesterol watchers.

Potato based, fiery Batate Waagh, Bitter gourd in chilli, jaggery, tamarind along with sugarcane called as Karaathe mennskai and spinach and raw papaya based, Vaali ambat are some of the options for vegetarians.

You can have these with neer dose, Mangalorean rotti or what is popularly known as kori rotti, sannas or rotis.

Moong Pulao stands out in the rice section.

For desserts, there is a traditional array. Pattoli, coconut and jaggery steamed in a turmeric leaf and Raagi Manni or Millet souffle if you will, are popular.

They do not serve liquor. But if you carry your own poison, they will serve it with corkage charges.

All this cultural history does not come cheap though. It costs Rs 1500 for two people.

Citizen Matters reviews the restaurants anonymously and pays for the meals.⊕