It’s a busy time for Bengali Associations across Bangalore as they are in the midst of organising Durga Pujo. This is the time of Puja, new clothes and getting together with the community to share a rich heritage of performing arts and cuisine.

One such Pujo is being organised by Bengali In Bangalore (BinB), a non-residential Bengali community online. The theme for this year’s pujo is Awkal Bodhan which depicts a scene from the Ramayana of Lord Rama doing a puja before going to Sri Lanka to rescue Goddess Sita.
Apart from this there will also be Dhunuchi Naach, a traditional dance where people, usually men, balance diyas or aarthis (lamps) on their palms and dance by turning and bending their arms. The loukik-aloukik show (the real and the unreal) is a magic show that reveals the way illusion is created. 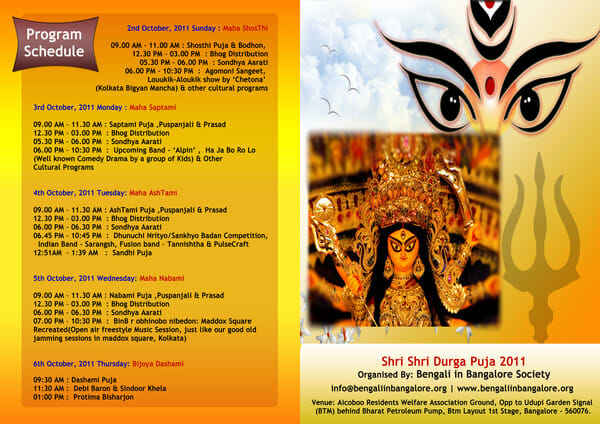 A comedy drama based on author’s Sukumar Ray skit ‘ Ho jo bo ro lo’ will be performed by children on 3rd October. Sarangsh, a band, will having songs sung in fusion and semi-classical style. A special attraction is the recreation of the mood of Kolkata’s Maddox Square, where people come from different places to participate in a free style musical performance. BinB has invited 300 guitarists to perform at this event on 5th October.

Open to the public, people can enjoy delicacies at stalls selling traditional vegetarian and non-vegetarian Bengali cuisine. This includes dum biriyani, egg rolls, chicken rolls, luchi (poori) and kosha mangso (a mutton delicacy), and fish fry. Beginning from 9 am, the programmes continue late into night on most of the days.

Bengali in Bangalore (BinB) was started in 2005. It has over 5000 members, says Barun Paul, Secretary, BinB.  Being a non-profit organisation, BinB brings youth of different communities closer through a unique blend of equally strong footprint in real space as well as the online world. There are around 400 members in Bangalore.

They regularly conduct other events too. The have been conducting Saraswati Puja for four years now. They also celebrate Bengali New Year Celebration (Poyla Boishakh) and the monsoon celebration (Bawrsha Boron).

About Uma Swamy 16 Articles
Uma Swamy is a JP Nagar resident and columnist.