You would have loved to grow up in the pleasant, perfect, considerably privileged locality of I Block, Jayanagar. The streets were clean, sidewalks smooth, roads neatly planned and regularly tarred: Not a single game of badminton on the streets was ever interrupted by an infrastructural glitch. The children who lived here attended "good schools", spoke purr-fect English and by age 8 could carry off a full fledged shouting-match over games of I-Spy in The Queen’s very language.

After all, we’d grow up to be independent people, leading awesome lives. Not the least like those children, who came to be recognized as aberrations in a picture-postcard existence. The nearby government run school was the ready standard for ruin. Uncouth behavior was likened to ‘like the urchins’ from that school. Screaming, littering, trampling people’s gardens, fighting…; these kids, about our age, were the instances of what not to be as they were bumbling spectacles at 4 P.M each evening, most of them returning from school to their houses located a few blocks away.

Later, as young adults growing up to life’s realities, many of us quietly acknowledged the only thing these kids were really afflicted by: the lack of a proper learning platform. That understanding, perhaps, encouraged many of us to make the best of our own privileges. Growing up, learning from the same distinctions was twenty one year old Aparna Nagaraj.

Having graduated recently,she spent the last few months in preparing for entrance exams and applying to universities; wanting to spend her time away from studies well, she enrolled as a volunteer at the Parikrma foundation’s school for underprivileged children.

Incidentally, Parikrma is located only a few hundred yards away from the aforementioned government school. Both schools educate children from economically weak backgrounds. The similarities end quite there. The latter is a mucky broth of primitive systems, apathy, bureaucracy, and blatant mismanagement. The former though, in my opinion, is one of the biggest success-stories of the city’s activist avatar.

I walked in to Parikrma at Jaynagar I block, last week, when classes were in session and when Aparna had decided to meet the kids because she "badly needed respite from writing and editing too many SOPs".

I don’t especially like little children. I cannot make this post a moving tearjerker just because this is about poor little kids. What I can tell you, though, is the truth: that when I walked in at about 2. PM, there was mad chaos at the first standard class Mercury (All classes are named after planets). Their class teacher had been busy and the librarian, a cheerful Miss Mary, and two volunteers were trying to settle these tots into some semblance of order. All the other classes, it seemed were running perfectly. At mercury though, mercury rose! Tiny little beings were scurrying around, in rather smart Blue and Green uniforms and Navy Blue sweaters. Some were particularly happy about their sparkling new shoes.
After pandemonium was suppressed, it was time for Math. "Nine in your mind, Five on your fingers, now count" Aparna was saying to one kid, dealing with each of them gently but firmly (You learn that in college, some professors are neither). Eerily enough, it hit me then that this was how we all started-with numbers on our minds and fingers (and hating it). Aparna proceeded to show me all the paraphernalia she helped to make for the class. On one wall hung a counting chart. Another had the class schedule written with various markers.

Aparna’s work involves executing the class-teacher’s plans for her class. She helps them with class work and occasionally, even reads them stories. Jack and the Beanstalk is a favorite, by the sound of it. But today, there would be no stories, in spite of our repeated insistence. 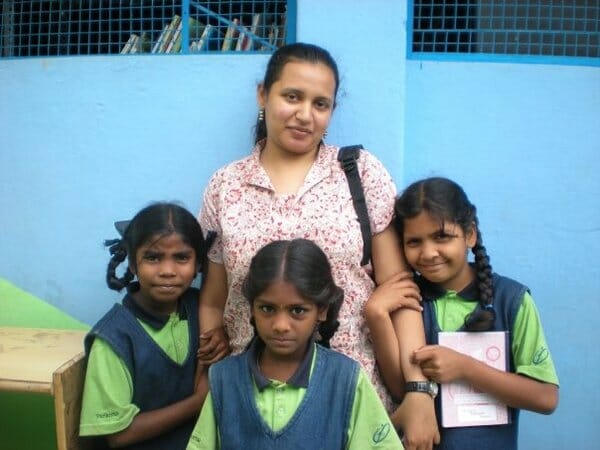 I remembered Aparna telling me about a kid who showed signs of a learning disorder. I finally got to meet the girl who was now getting on wonderfully. Some children come from orphanages she explains "…and my heart goes out to them." I coax her to tell me who her favorite student is, but she refuses; prompting me to rethink the strength of our 16 year-long friendship.

The school gives them everything from uniforms to books. Not a penny is taken from their parents. I noticed that each of the classrooms (and the small but excellently stocked library) wore a badge honouring its sponsors. A plaque displaying the logo of a telecom major hung in Mercury (which, a co-ordinator explained, meant that the company sponsored all the children of that class).

While I stupidly made notes about journalist-type-details, the little green men (Class Mercury, Green Uniforms, Little Green Men: So funny, no! No?) and women trudged up and demanded to see my notebook. In what I will proudly remember as a moment of strategic cunning in handling raging enthusiasm, I let them all take turns to write their names in my book. After an initial, unsuccessful attempt at hushing them up by turning them into statues went horribly wrong (they laughed at me. It turns out this trick from my time is old fashioned. Egad!), this was a welcome victory.

As they rightly corrected me on my misgivings about alphabetic order and eagerly wrote their names in neat, deliberate hand, I realized that, thanks to Parikrma, these children won’t be driven into living and struggling in a parallel society defined by "underprivileged" means and more critically, zero opportunities. Unlike millions of children from our cities and villages, perhaps, these kids will one day define their own successes; and then chase them.

I asked Aparna if she really believed that these children could coalesce into the mainstream, and pursue dreams like anybody else, like the rest of us. She seemed surprised at the question. "Look at the opportunities they are getting. I’m perfectly sure they can." She said emphatically. She pointed at a child who was smiling shyly at us "He is so good at Math; I’m at a loss for new problems each time because he is so quick".

Parikrama has four centers in Bangalore. Besides Jaynagar, they have a campus each in Nandini Layout, Sahakarinagar and Kormangla. Between these four campuses, they teach from classes 1 to 9(ICSE) through class 10 and the first year of Pre-University. The school has an intense family-support program. "The poverty is so dire, they inevitably turn into helpless alcoholics, unable to support families" says a co-ordinator at Parikrama. The school counsels parents, trains older siblings who are beyond school-going age with skills that can help them earn sustained livelihood. Parikrma takes full care of every child’s medical and nutritional needs. 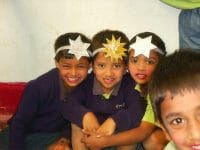 Student volunteers from abroad and professionals on their days off are a common sight at Parikrma’s campuses. But aren’t flash-in-the-pan volunteers a nuisance at hard-to-govern NGOs? A smiling co-ordinator wisely explained how it was otherwise, "Most of our children don’t come from families where they’re inspired to become educated people. But when these professionals come and talk to them, however briefly, they want to emulate their success." She puts it deftly when she says "They are our children’s window to the world". Parikrma’s students have continuously won medals at sporting events, competing with children from the best schools in the city, organized by KPMG.

Many students from city colleges are regular volunteers at Parikrma. Some teach English, some help with math and others with sport. Aparna has a separate circle of friends she’s met at Parikrma. "It’s really awesome, what you’re doing" I gush. "But I do this because I like to" says Aparna, matter-of-factly.

We agree that it is best to keep it this way: undramatic, practical and simple; what this set of people is doing at Parikrama, is noble, but they do it primarily because it is satisfying to them.

Personally, I’ve never understood how "service" (don’t you hate that word?) works. Parikrma proves to be an unpretentiously symbiotic set-up: which is how it sustains itself. There is much to be gained from teaching children. All your skills are put to test. Many other friends (who have volunteered at other schools) have testified to learning to manage people better afterwards.

To understand what you stand to gain, besides, go stand in a classroom full of these children chatting merrily, loving every bit of the math they’re made to do. No matter what your equations with Education; how many ever times you’ve declared education useless, or idiotically head-banged to philosophies such as "another brick in the wall", it will invariably warm your heart. That, I found, was a lot to gain.

Parikrma loves volunteers and would be delighted to find help of any sort. You can find more information here http://www.parikrmafoundation.org/
⊕