We chatted up some nice folk from NITT who seemed to love every minute of being there. But, but, but, what about staying away from home, cruel weather, homesickness etc, We pried. To this I heard the singly most common sentiment that’s been expressed by nearly every NITian I’ve known. They admit that the one thing they’ll take home with them, even after graduating, is the friendships garnered. I heard, not for the first time, somebody speak about how they could never connect with people from outside college the same way again. The rapport and camaraderie established are based on issues of common interest, of a quality quite different from regular conversations. Yes, you might call it snobbery, but they don’t seem to care.

Cluedo at NITT was based on the case of a Cricket coach with interesting video clues (Pic: Siri Srinivas)

On a lighter note, the infamous ragging at the hostels is nearly non-existent now, we hear. Also, whatever little happens is very organized, and has its own set of rules-with even the option of a ‘boycott’. We heard that Lehmann Bros had come calling for internships and jobs, just days before the crash and even took a couple of people. Ouch, we thought.

So isn’t hostel life dreary? People there believe that the conditions got much better after RECs were converted to NITs and put on central funding (RECs were funded by the respective states until 2003) when hostels were revamped and infrastructure revved up.

This was Trichy, three days of first-time experiences, a few surprises, and a few strains of gossip over three good days, and it was time to finally bid goodbye.

Thanks to buses and trains being reserved for days, we were forced to route to Salem and then catch whatever moving contraption would help us reach Bangalore in a few hours. We squeezed into shaky local buses with women (invariably dressed in silk sarees and lots of gold jewelry) peering at us curiously as we collapsed onto any seating space available. 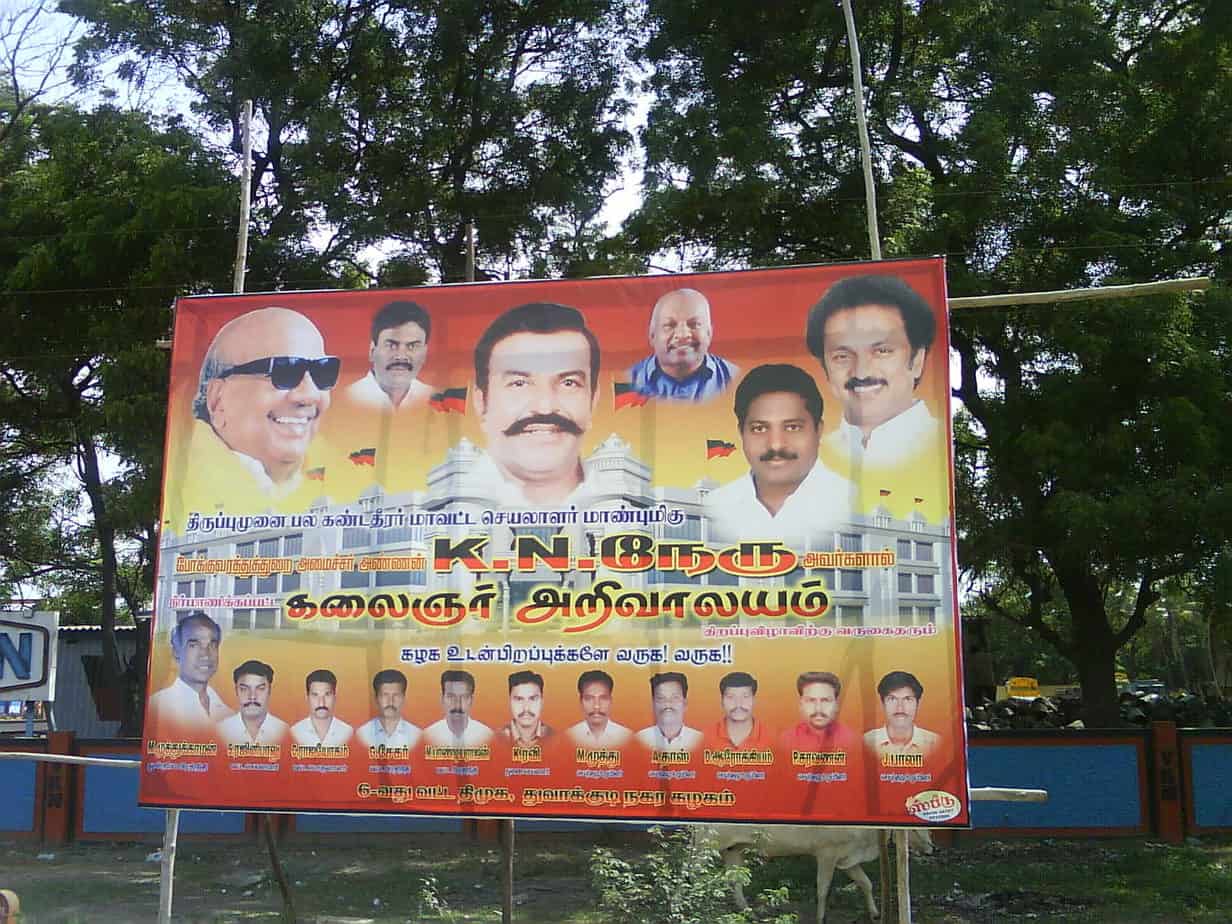 Something we’d observed on arriving was now impossible to not notice. The place is fanatical about its politicians. There was a DMK rally being held at Salem apparently, and I’m not exaggerating here, the entire distance between Trichy and Salem had posters and related paraphernalia featuring Karunanidhi, MK Stalin and Azhagiri. I am positive that spotting one more poster would have turned me hysterical. It gets unnerving to see the same faces smile down at you and wave out of posters every 10 metres for three hours.

Some of us got into minor discussions on the political scene in TN but were cautioned by a wiser friend that it might just not be the best conversation to have in a TN bus.

We read, slept, listened to music, cracked more inane jokes and reached Salem at long last. We scouted for a place to have dinner at, stalled until 11.00 PM and took a rickety, aging bus to Bangalore. Now this bus reeked of alcohol and had broken windows. We realized then what the guys had meant exactly when they said that this was ‘roughing it out’. Like I mentioned already, a major lesson learnt from the trip was about being responsible for our own selves-things few of us, as students, get to be yet, in our personal lives leave alone the independence ‘education’ allows for. (The biggest lesson, though, was How to Not Complain When Things Go Wrong.)

With a Tamil movie about godly men and village belles to keep us sane on the bus, we got back home at 5 AM, as quick naps turned into slumber marathons and it took us a week to recover from the madness and excitement.

To round it off: 5 lessons learnt from the NITT experience

1) Traveling with friends is the most wonderful thing ever. When else do you get to stay up till 3.00 AM and talk about this, that and the meaning of it all, otherwise?

2) Engineering education in India and everything attached to it is unapologetically sexist.

3) The best thing about Festember was *drumroll* the watercoolers! Don’t believe me? You simmer in temperatures beyond 35 C and then find machines that tirelessly dispense clean, ionized, CHILLED water to anybody that asks, and you’ll know. The well-organised fest comes a distant but respectable second.

4) Remember to thank god always, for wonderful weather, and for home food.

5)  And very importantly: When college bands play so-so covers and then pose stupidly for photographs, don’t laugh. At least not loudly enough for others to hear!

All photo credits- Nakul PS and his trusty cellphone ⊕