After two successful shows – one in Amsterdam in March 2019 and the other in Bengaluru on August 24th at Courtyard Koota, Kengeri, the dance-theatre piece ‘Goddess and her Magic Broom’ will be performed at Vyoma Artspace and Studio Theatre on September 14th at 6.30 pm.

‘Goddess and her Magic Broom’ is a dance-theatre performance based on poetry and imagery created around a homemaker’s life. Rendered invisible or reflecting the form accorded to her by a patriarchal world, women do not have it easy – whether they operate from a space of choice or role-play. Juggling familial and societal expectations, fighting gendered conditioning and working with infinite to-do lists in a world that is fast melting its way to doom, where does a homemaker have the time or space to open conversations with her body, sing her songs or speak her truth – even if to herself? ‘Goddess and her Magic Broom’ explores this and other questions while celebrating the voice and madness of Goddess – a woman who is wild, free and beautiful.

Goddess is a woman who is struggling with deification and denigration simultaneously. Created through collaborations between three women, the piece weaves together poetry, text, movement, sounds and music and attempts to offer glimpses of the world that women inhabit, from new perspectives. Three artists come together to share their experience and skills sets to shape a performance that talks about ordinary women around us. They craft work that looks at the political in the personal and throws light on transformative stories. 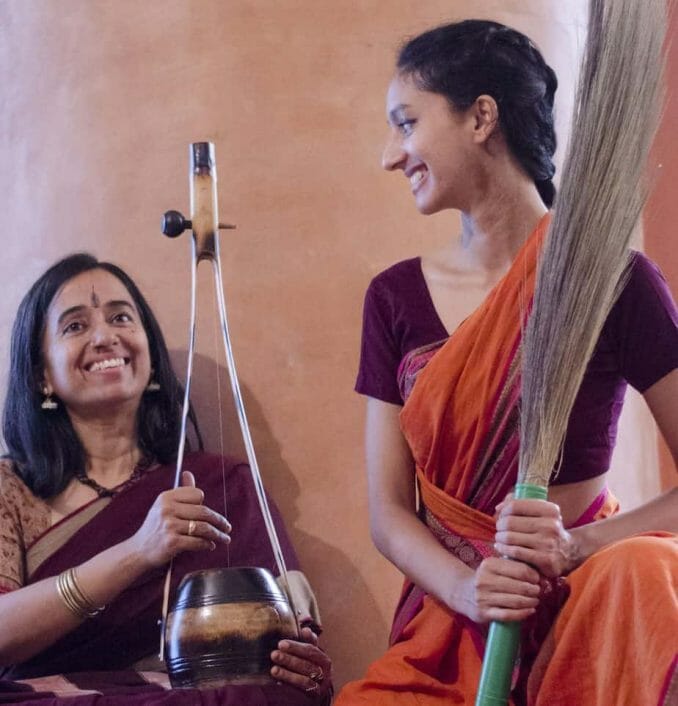 Anishaa Tavag (dancer & editor at the Clean Copy) who watched the India premier at Courtyard Koota shares that she was moved by the piece, loved how “unapologetic” and “whimsical” it is. “It felt more feminist than a lot of other “feminist” work I’ve seen because it didn’t just show me a problem–it also showed me how we (or the character, or the other voice in this world) see the problem. The humour was just so on point.” Other audience members shared that the images from the performance stayed with them or came up as questions and discussion points well after the show too.
Veena Basavarajaiah who has directed the piece says, “I want to debunk the popular narrative that only when you go beyond the mundaneness of the domestic life can you truly be a feminist. I feel that this intellectual narrative is highly elite and excludes a large section of women of the society, especially homemakers, who fought the battle against patriarchy in their own unique ways. Often the emotional and physical labour of these women is not acknowledged and how it impacts the wellbeing of the society is overlooked.”

“Revered by everyone, yet not respected,” is how Harshitha Bhat, a performer, singer and dancer, describes the way women are viewed in society. “A woman is a goddess and yet she is not. While living for everyone, she has forgotten how to live for herself, always the giver. Forever stuck in mundanity of everyday life and strife she has forgotten what it was like to have dreams. ‘Goddess and her Magic Broom’ for me is about giving voice to this woman. She is self-made, self-sustaining, strong, bold, opinionated, questioning, wild and ultimately self-content. She cannot be subdued,” she says. For her personally, working on this piece has been “a journey of self-realization, growth and an expression of freedom,” she says.

Charumathi Supraja, a writer, poet, composer and actor says, “There is much silence, poetry, music and noise in a woman’s life that does not get reflected in the world. This work taps into that channel.” 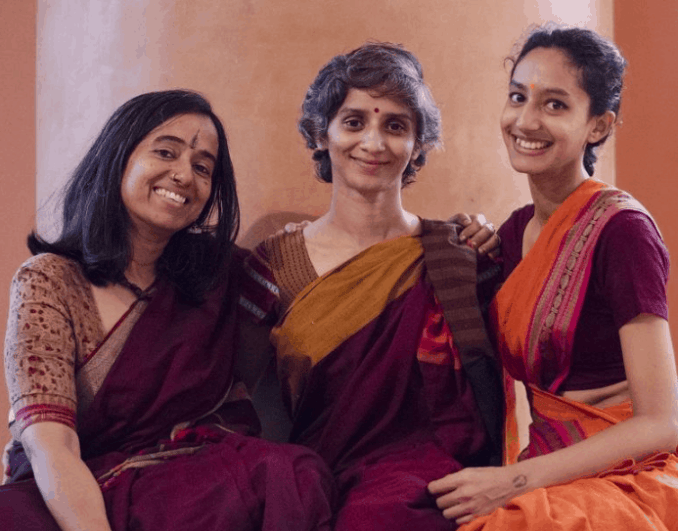 Veena Basavarajaiah is a contemporary movement artist from India. She is an independent performer and choreographer who has collaborated with theatre artists, film makers, scientists, musicians and visual artists. She is an empanelled artist of ICCR and her independent works have been presented in various national and international festivals. She has worked as movement director in many plays and has directed many dance-theatre productions. She has also worked with renowned dance companies and performed extensively around the world. She has done her MA in South Asian Dance Studies from Roehampton University, UK and has written several essays and critiques about South Asian Dance.

Harshitha Bhat is a trained Bharatnatyam dancer and has performed in various parts of India and abroad. She has had training in both Carnatic and Hindustani music. She currently is a full time working professional and heads finance of her family’s Pharmaceutical Company. After a long break in the field of arts personally and professionally, she is finally getting back into it with this performance.

Charumathi Supraja is a Bangalore based writer and poet who has worked as a journalist, lecturer and communications consultant. After a sudden encounter with Theatre of the Oppressed, she started training in acting, theatre facilitation and movement. She perceives her writing journey to be directly connected with movement and music – and is learning to play the violin. She collects people’s tree stories and memories in the Treevellers’ Katte – a holding space she created to track the impressions that trees leave on people. Charumathi has composed music and written the text and poetry for Goddess and her Magic Broom.