JP Nagar Citizens’ Association (JPNCA) on 9th October celebrated its 35th Anniversary at VET School Auditorium. A little over a 100 members gathered at 530 pm in the evening as three senior past presidents of the association – Colonel (Retd) G K Burli, V S Rao and Bhoja Shetty were honoured on the occasion. 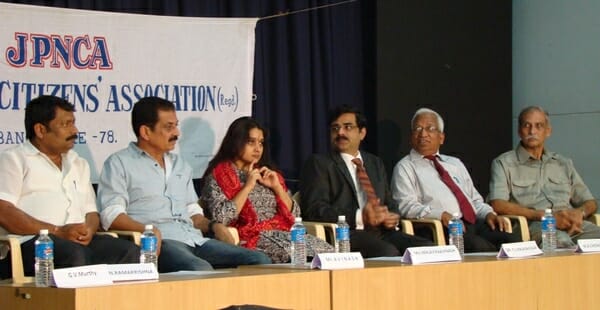 Speaking at the event, current President M A Chowdappa said that apart from focussing of civic issues plaguing the locality, the Association will embark on membership drives in the coming months to increase participation. "We need more youth to participate in the association’s activities for it to grow," he said.

Over hundred had come to the function. Pic: Yogaraj S Mudalgi

V S Rao, who served the association as president in the mid-nineties, recalled how the association has grown since its formation in the late seventies. "JP Nagar had barely any houses then and no street lights. We would go to KEB’s office after work to get a lineman to come with us and install the lights," he said. In the eighties when dacoity on the outskirts was on the rise, members of JPNCA had taken turns in patrolling the area.

Some of the other achievements of the Association include getting to shut down a hazardous gas emitting chemical factory in the late eighties and more recently, legally reclaiming land given to a religious organisation but which was originally allotted to build the Dhanvanthri Park in JP Nagar 2nd Phase. ⊕