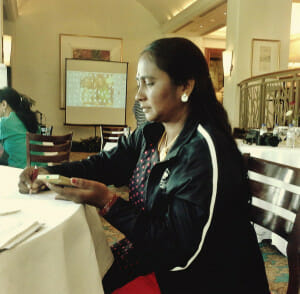 Indira, wastepicker from Bengaluru, made a passionate plea to world governments for recognizing contributions of wastepickers in ‘New Urban Agenda‘ during an event organized on the sidelines of United Nations (UN) Habitat III Prepcom at Surabaya, Indonesia. She emphasized on the fact that wastepickers keep the city clean. They save municipal corporations and local governments lot of money by channelizing waste for recycling. According to her, if an area generates 2 tons of waste, waste pickers take at-least a ton of waste from the same. They sort and sell it to the industry as raw material. This reduces the generated waste, help wastepickers earn for themselves and benefits the public at large.

She showed the occupational identity card (ID) of wastepickers issued by Bruhat Bengaluru Mahanagara Pallike (Greater Bangalore Municipal Corporation- BBMP) to the audience. BBMP ID card is an example of recognition and as per her appeal, the issuance of the card should be replicated. With the given ID card wastepickers can pick up waste without apprehension. Police doesn’t harass them. They can access public and private space to pick and collect waste.

She stated that wastepickers in India, Indonesia, Africa and wherever they are should be given identity cards. This is their Haku (right). With that they can access social protection measures instituted by respective governments.

Elaborating further on Bangalore example, she shared that municipal corporation of the city has installed Dry Waste Collection Centers (for aggregation, sorting and sale of recyclable, low value and no value waste). Wastepickers are operating many of these centers. They also got regularized income by working as sorters in these centers. A lot of wastepickers like her avail fair price by the sale of dry waste to these centers. Such initiatives should also be imitated in other places.

She spoke in Kannada and her words were translated in English.

World governments are meeting in Surabaya as a part of the Habitat III Prepcom to discuss the New Urban Agenda which will be finalized and adopted in Quito, Ecuador, late this year.

(Republished from the blog Waste Narratives)

About Kabir Khan 0 Articles
Kabir is a geographer by academic background and is currently coordinating Alliance of Indian Wastepickers, a national network. He writes regularly on www.wastenarratives.com and maleccha.wordpress.com. He is also a board member of Indian Youth Climate Network.
Website